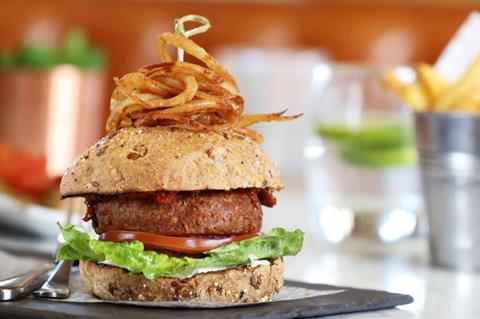 The Vegan Society has accused the EU of proposing legislation that would breach fundamental human rights laws after it proposed a ban on terms like burger to describe meat-free foods.

In a letter to EU parliamentarians challenging the suggested ban, the Vegan Society fired shots the EC’s plans, calling them unlawful and ‘an attempt to bolster a depressed agricultural economy’. The letter gave the EU 21 days to respond before the Vegan Society would escalate its legal challenge.

It comes after the European Union’s agriculture committee overwhelmingly approved revisions to food labelling regulations that would prevent terms traditionally pertaining to meat products (like steak, sausage or escalope) from being used to market vegetarian alternatives.

The Vegan Society contested alternative vocabulary suggested by the committee, such as ‘vegetable disc’ did not constitute clear food labelling under EU consumer law because they wouldn’t “describe or facilitate ease of interpretation, nor make it easy to perceive the food item in question”.

Further, the authors said the EU’s proposals would unfairly penalise small businesses, and create ‘excessive administrative burdens’ to public bodies forced to amend menus. It argued amended menus would ultimately ‘cause confusion’ among consumers as a result of ‘unclear and ineffective communication’.

“As consumers are increasingly moving away from eating animals, the demand for vegan products is growing. There’s no denying that meat, dairy and egg industries are feeling threatened by this and desperately trying to restrict the marketing of vegan products,” said George Gill, CEO at The Vegan Society.

“These proposals have little to do with consumer protection and instead are motivated by economic concerns of the meat industry. We are calling on EU officials to reject these irrational measures for vegan meat alternatives to be banned from using the qualified conventional terms everyone has been using for decades.”