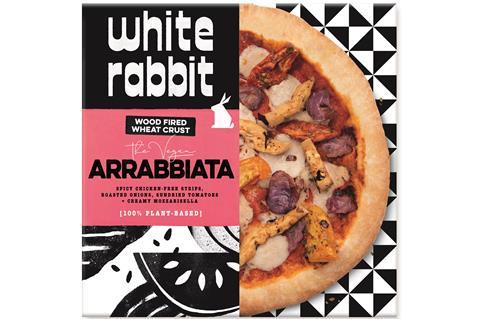 White Rabbit is to launch its first wheat base pizza into Sainsbury’s in the new year as it looks to entice a broader range of shoppers.

The pizza marks the first time the challenger has forayed outside its gluten-free remit.

White Rabbit co-founder Nick Croft-Simon said flexitarian shoppers were key to the brand’s mission – “to craft delicious authentic pizza that everyone can enjoy”.

The NPD takes the form of a vegan ”meaty” pizza, called The Vegan Arrabbiata, which is topped with spicy chicken-style pieces, roasted onion, sundried tomatoes and vegan ‘mozzarisella’.

The brand is also extending its gluten-free range with a duo of focaccia. Farmhouse Focaccine will debut at Waitrose while Garlicky Focaccine will launch into Sainsbury’s and Ocado (rsp: £3/2x135g).