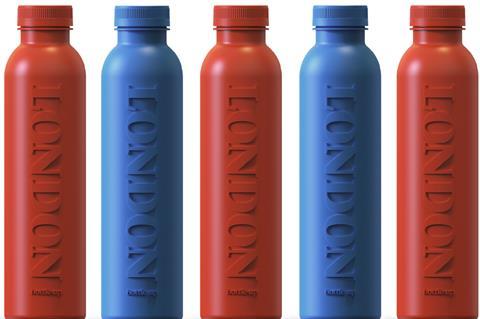 5p of every sale will be donated to Charity: Water

Eco-friendly bottled water startup Bottle Up has made its debut with two bioplastic SKUs intended to reduce plastic waste caused by tourism.

Bottle Up’s coloured bottles come in Stone Blue and Indian Red variants (rsp: £2.49/500ml). They are produced in Wolverhampton and filled with water from Elmhurst Spring in Staffordshire. Aimed at holidaymakers, both are embossed with ‘London’ as part of the brand’s plan to roll out bespoke versions to popular tourist destinations around the world. ‘Dublin’, ‘Amsterdam’, ‘Lisbon’, ‘New York’ and ‘Tokyo’ are set for future launch.

All packs are made from plastic derived from sugar cane, with 5p of every sale donated to Charity: Water, which works to provide access to clean water to communities across the globe – especially those in rural areas.

The new drinks are available via Bottle Up’s website, with retailer listings expected later in the year.

While the brand has chosen the UK for its debut, it was founded in the Netherlands by Jasper Bosschieter, Bart Willems and Andrew Eversden. Having lived in Amsterdam’s city centre for most of their adult lives, they started Bottle Up after seeing the amount of plastic waste created by tourists.

Visitors to the city left behind “a trail of waste from single-use water bottles” Eversden said. “With transport becoming easier, faster and cheaper, tourist numbers will increase heavily in capital cities around the world over the coming years.”

The average tourist drank 2.5 on-the-go bottles of water a day, he added. “These bottles are used just once and often end up in landfill, rivers and oceans, causing great danger to the environment and wildlife.”