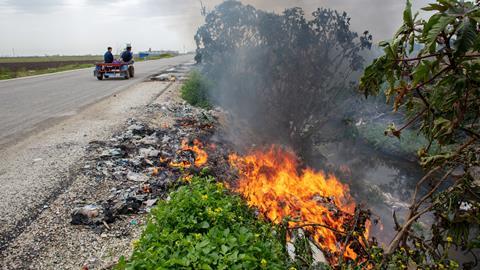 Can the Flexible Plastic Fund make a genuine impact?

Although the fund has support from some big hitters in the industry, serious work is needed to create a circular UK market for soft plastic

The shocking images that emerged last month of packaging waste from the UK’s leading supermarkets littering the beaches and roadsides of Turkey were powerful new ammunition for critics of the industry’s efforts on plastic.

The images, published in a Greenpeace report, threatened to erode sympathy for the sector just as food and drink bosses are calling for the government to reconsider plans to land it with a £2.7bn recycling and litter bill, in the form of extended producer responsibility (EPR).

So the new Flexible Plastic Fund – launched last week by industry giants including Sainsbury’s, Waitrose, Mars UK, Mondelez International, Nestlé, PepsiCo and Unilever – was well timed. If successful, it could pioneer new ways for the UK to deal with its own rubbish. But what are its chances?

Against that daunting EPR sum, the £1m total up for grabs in the fund, which will be managed by compliance company Ecosurety with the support of environmental charity Hubbub, may seem rather paltry.

However, by guaranteeing a minimum value of £100 per tonne of recycled product, the fund hopes to kickstart the creation of a sustainable market for the recycling of plastic bags, crisp packets, biscuit wrappers, frozen food bags and other types of soft plastic, which are currently collected by just 16% of local authorities, according to the latest figures from Recoup.

Under the existing packaging recovery note (PRN) system, Prices paid for plastics, including soft plastic, varied wildly in 2020, from just £8 to £250 per tonne. According to the fund’s creators, that situation has made the creation of a reliable UK-based circular market for soft plastic virtually impossible.

“The fund creates a sustainable market for these plastics by setting a minimum price that recyclers will be paid,” says Robbie Staniforth, head of innovation and policy at Ecosurety. “Recyclers of this material have found it difficult to plan their investments as the costs of recycling could often be greater than the value derived from the material. The fund makes recycling in the UK a much more viable activity.”

However, Staniforth admits it will take far more than £1m for the fund to succeed. It will also depend on collaboration in a brutally competitive industry.

“To have the biggest possible impact, we hope to grow the size of the pot and increase the funding that recyclers can expect,” says Staniforth. “The fund helps to support retailer collections of flexible plastics but the retailers themselves have own-branded products they create and can join as funders too.

“We anticipate that waste management companies and reprocessors will be getting in contact to understand more about how they can access funding to make their processes and investments viable. It will take a willingness on their part to be transparent about the collection, transport, sorting and reprocessing of material for the fund to work.”

While the fund’s launch partners Sainsbury’s and Waitrose already offer flexible plastic collection points, much will hinge on ongoing talks with other major supermarkets.

So far, retailer efforts in the area have been sporadic to say the least. In March, Tesco announced 171 stores were collecting all types of plastic bags and wrapping across the south west of England and Wales, with plans to roll this out to all stores nationwide. Sainsbury’s has been trialling collection in the north east with a full rollout expected by the end of this year. Other supermarkets conducting trials include Co-op, in 51 stores across the south east, and Aldi, which recently introduced soft plastic collection points in 20 stores in Yorkshire, Derbyshire and Greater Manchester, to be rolled out across the estate if successful.

Staniforth is convinced the fund can attract the mass backing and collaboration needed. “We have been very impressed with the founding partners’ ability to join forces,” he says.

“However, success will be largely dependent on the quantity of brands joining over the next three to six months. Achieving a critical mass of support will allow us to undertake vital auditing to verify material as being post-consumer and genuinely recycled.”

As for the government, ministers are planning to make collection of soft plastic from households mandatory, but it could take until 2026. Given only about 6% of flexible plastic packaging is currently recycled, that leaves a lot for the industry to do between now and then.

The fund is targeting the recycling of 5,000 tonnes of flexible plastic in year one, rising to 10,000 tonnes in year two, so that by the time EPR comes in, the embryonic market is far more established.

“The fund is designed to demonstrate that the public is willing to sort and recycle flexible plastics, that retailers are willing to invest in collection processes and that recycling companies can process the collected materials,” says Hubbub CEO Trewin Restorick.

“We want to work with organisations across the entire flexible plastic supply chain so they can become a driving force in quality flexi recycling.”

Given scrutiny like the recent Greenpeace investigation, transparency will be of critical importance, says Restorick. Strict auditing rules must be in place to ensure payments are only made once evidence is provided that the collected material has been recycled and meets stringent criteria.

Eighty per cent of the funding is to be allocated to UK-based recycling facilities. The other 20% will be spent in the EU, where there proves to be insufficient technology or capacity in the UK. This will shift to 100% UK-only by 2023. The fund is also ruling out products being sent beyond Europe, where tracking can become more of a minefield, including destinations like Turkey and Malaysia.

“This will ensure that collected material is not being dumped in countries such as Turkey as was highlighted by Greenpeace,” says Restorick.

Despite such reassurances, campaigners have only given a cautious seal of approval.

“We welcome initiatives that improve our poor recycling record, particularly where the recycling will happen within the UK,” says Dr Laura Foster, head of clean Seas at the Marine Conservation Society.

“As companies see revisions of the EPR on the horizon we hope that legislation will ensure companies become proactive, looking at the materials and their design to boost their recyclability.

“However, it’s estimated that globally less than 15% of plastic is recycled. EPR is unlikely to solve the plastic crisis on our beaches – every year our volunteers find huge volumes of flexible plastic. We need to move to a reuse society, especially given that in the UK we currently use three times our share of the natural resources available.

“We can’t recycle our way out of our existing plastic crisis.”

It’s a phrase guaranteed to resurface time and again as plastic waste rises back to the top of the agenda in the wake of the pandemic. For all those determined to prevent those scenes on the beaches of the Mediterranean coming back to haunt the industry once more, much will hinge on progress in the next six months.

How the Flexible Plastic Fund works