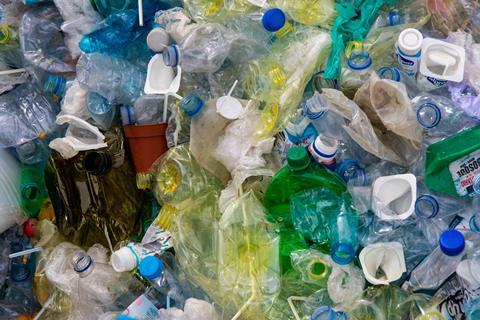 Thanks to TV programmes such as Blue Planet, organisations such as the Ellen MacArthur Foundation, and the shaming of world leaders by our schoolchildren on climate change, plastic is now at the core of the debate on global warming, waste, and environmental and animal conservation.

The statistics are damning – there are 100 million tonnes of plastics in the oceans, and this figure rises by eight million tonnes a year, while just 10% of plastic has been recycled since its widespread introduction in the 1960s. Current projections show that by 2050, there will be more plastic than fish in the world’s oceans, according to Ellen MacArthur.

However, in the face of these unnerving statistics there is no clear consensus on what important next steps need to be taken to tackle the problem. At an international level, the major consumers of plastic, such as the US, could show greater leadership in managing the epidemic, while countries like China are closing their doors to imported plastic waste, which could provide a catalyst for action.

At a sector level, though, the picture is more encouraging. The fmcg industry has been actively transforming its virgin plastic footprint, albeit from a very low base of <5%. Many consumer product companies have now committed to increasing the recycled content in their packaging to 25% by 2025 and the EU is likely to mandate a 30% level by 2030. But greater urgency is required, given the scale of the problem.

Encouragingly, Unilever raised the bar by doubling its recycled plastic commitment to 50% by 2025. Apart from Coca-Cola, which is also targeting 50% by 2025, most other commitments fall short. It will be interesting to see if this increased level of ambition becomes the industry norm.

Of equal importance (but lesser mentioned) is Unilever’s 2025 commitment to reduce the absolute amount of plastic it uses by 100,000 tonnes. Although still niche, good progress has been made, in encouraging consumers to use refills for brands like Cif, and in compaction technology across its detergent and deodorant brands. Less plastic is the best outcome, but ironically this option requires the most innovation given it’s such a versatile material. Making changes without impacting consumer convenience or prices is very tough.

Barclays excellent Sustainability & Thematics research team, led by Hiral Patel, has identified three pressure points on recycling infrastructure: recycling rates are low, waste is often contaminated, and yields are low. With only 16% of plastic recycled there simply isn’t enough supply to meet booming demand or to hit the new ambitious targets. Depressingly, in the UK we often need to import recycled plastic from Germany, which is clearly not a long-term solution.

Some commentators have argued that bioplastics derived from crops is the answer, but we have our doubts. Typically bioplastics release greenhouse gases, leave traces of toxins, and can even contaminate traditional plastic waste, making it harder to recycle. However, new biochemical and chemical recycling technologies look promising and could tap into a $60bn market opportunity, according to McKinsey.

One interesting policy solution is Consumer Deposit Schemes (CDS) and particularly reverse vending machines. Germany launched a scheme in 2002 that has resulted in 98% of its PET plastic being recycled vs just 38% in the UK. Barclays estimates that emerging technologies and CDS could boost PET recycling rates in developed countries to 70% by 2030. However, the UK government is going slow on the timetable, and the project now risks lengthy delays. Implementation costs are estimated to be £850m in year one, according to Defra’s impact assessment.

Few companies other than Unilever have spelt out the costs of moving to recycled plastics. Recently it announced it would incur a €100m cost in 2020 – a big absolute number, but Unilever’s turnover is more than €50bn a year. But this demonstrates that real change requires major supply chain re-engineering and years of upfront investment before returns start flowing.

Barclays Research is hosting a big plastics event this week and if client and company attendance is anything to go by, the future is promising. With innovative companies like Loop, Carbios and Tomra focused on this problem, necessity is the mother of invention.