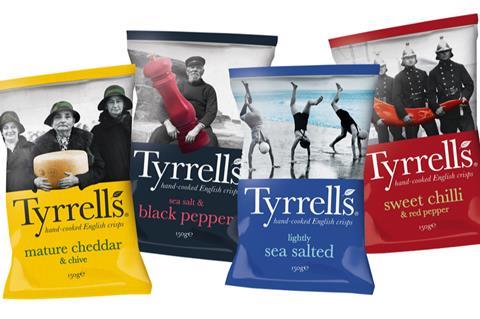 The smaller packs would save 69 tonnes of material annually, said KP

KP Snacks has made further packaging reductions on its Tyrrells crisps.

The bagged snacks giant is slashing approximately 14% of the packaging from Tyrrells’ film packets, reducing their height and width by 25mm and 10mm.

The packs are expected to be fully rolled out by the end of 2019 and would save 69 tonnes of material annually as a result, said KP.

It will also begin “optimising” case sizes to fill retailer shelves without the need for unpacking.

And this September KP removed almost a quarter of the packaging from multipacks of Hula Hoops, which it said saved 11.2 tonnes of material per annum.

Tyrrells global marketing controller Dan Winslet said KP was “committed to lessening the environmental impact of our activities, and this investment in reducing plastic across our portfolio is just the first step in this process.”

KP sales director Andy Riddle said that “the need to reduce, remove and recycle packaging is as prevalent in our category as it is in any other”.

Yet the process of removing packaging from the supply chain was not simple, Riddle added.

“A decision could be right from an environmental perspective but the wrong one for food integrity - it has to be looked at very carefully”.

“The technology investment referenced was to re-engineer existing machinery to be able to support a pack size change across the 150g portfolio.”

The move comes in the week a damning new report found brands had increased their use of plastic despite public outrage over plastic pollution. The report, by Greenpeace and the Environmental Investigation Agency, based on figures from the top 10 supermarkets, revealed food retailers put more than 900,000 tonnes of plastic on the market in 2018, an increase of nearly 2% on the previous year.

Seven out of the top 10 UK supermarkets increased their plastic footprint, with only Waitrose, Tesco and Sainsbury’s achieving marginal reductions.

However, packaging from brands weighed in at 367,000 tonnes, a 5% rise, making up more than 40% of the plastic in supermarkets.

Tesco has led calls for branded manufacturers to step up their efforts to reduce packaging, with CEO Dave Lewis accusing suppliers of “making an art out of packaging air”.

Riddle added: “I was at a Tesco conference a couple of weeks ago and Dave Lewis was talking about this and he put up what we’ve done on Hula Hoops as a case study for best in class.”