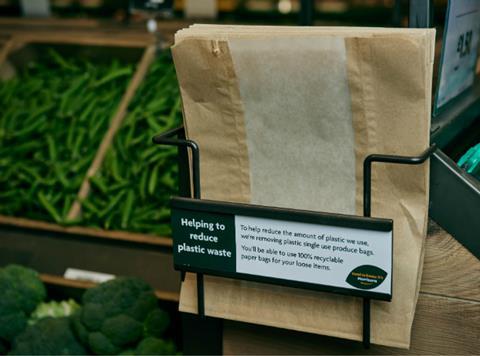 Morrisons is replacing plastic bags with brown paper bags in its fresh produce aisle as part of its ongoing push to reduce plastic waste.

In a move that would prevent 150 million small plastic bags from being used every year, the supermarket today said it had reintroduced traditional paper packaging in 493 stores, and would complete the rollout of the bags across its entire estate by the end of the summer.

The brown bags are made from 100% recyclable paper and have a see-through paper strip so that shoppers and Morrisons staff can identify the produce inside. Morrisons first introduced plastic packaging in its fresh aisles more than 30 years ago.

The paper bags come in one size and can be used for any of Morrisons’ loose fruit, veg and salad items. They will be located in bag dispensers at the corner of each fruit and veg fixture in each store’s greengrocery aisles.

The move follows a commitment by the retailer to phase out 5p single use plastic bags in February in favour of bags for life, after similar commitments by rivals Sainsbury’s, Tesco and Asda.

“We’ve listened to customer concerns about using plastic bags for fruit and vegetables and that is why we are bringing back paper bags,” said Morrisons fruit and veg director Drew Kirk.

“There’s more work to do, but this step will mean we prevent 150 million bags from being used in our stores every year.”

Morrisons has also pledged to give shoppers 100 loyalty card points, worth the equivalent of 10p, when they bring their own containers in store to buy meat and fish from its butcher and fishmonger counters.

See next: The Grocer’s plastic packaging webinar now available to view on demand