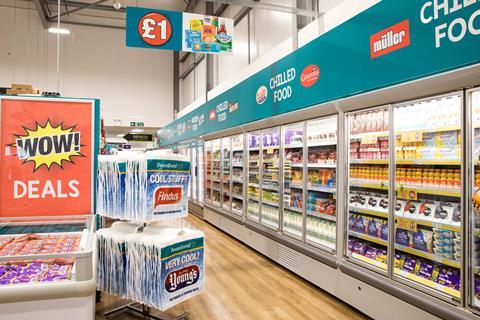 Poundland has announced the next 19 stores to get ‘shops in shops’ offering frozen and chilled ranges.

The 19 stores, mainly in the north and midlands, will gain the frozen and chilled offering between now and the end of August, at a rate of about five per week.

They include branches in Birmingham, Leicester, Peterborough, Coventry and Sheffield.

A further eight stores are to get the treatment in September, bringing the number to about 60.

Poundland’s frozen and chilled shops in shops were launched as a pilot in a handful of stores last year. A wider rollout began in March but was then paused while Poundland focused on keeping stores open during lockdown, before restarting in June.

The stores gain an aisle of fridges and freezers stocking about 400 products, including brands such as Bernard Matthews chicken breasts and Birds Eye cod fillets. The range has been developed in partnership with Yorkshire-based frozen food retailer Fultons Foods, with a focus on ‘everyday’ meals.

The move is part of a major transformation drive for Poundland. Last month the variety discounter announced the estate was to be revamped and stores split into three types - ‘destination’, ‘core’ and ‘convenience’ – and an online shopping service would be launched early next year.

Poundland said today the stores getting the frozen and chilled ranges would also get a makeover as part of the estate revamp and transformation, dubbed ‘Project Diamond’ by the retailer.

“We know that shoppers have got a real appetite for our chilled and frozen food offer which is why we are cracking on and converting up to five stores a week,” said Poundland retail director Austin Cooke.

“This is a key part of our transformation plans so that we can bring as many customers as possible even more choice and amazing value in chilled and frozen food.”

The next 19 branches to gain frozen and chilled shops in shops are: