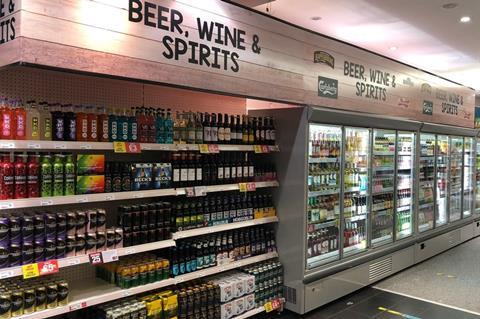 Poundland has launched beers, wines and spirits in the latest step in its transformation programme.

The trial has launched in three pilot stores, in Cannock, Stockport and Stoke-on-Trent, as Poundland tests which products should be part of a wider rollout in 2021.

Poundland is in the midst of one the biggest transformations in its history. Last year it introduced new multiple price points as it grew its grocery range and this year it has been busy rolling out frozen and chilled shops in shops, supplied by Fultons Foods, to about 60 stores.

In July, it announced plans to split its estate into three types of stores, ‘convenience’, ‘core’ and ‘destination’, each with a fuller range than the last. It also plans to launch online shopping later this year.

“We’ve been steadily expanding the ranges we offer customers and moving into beers, wines and spirits is the next logical step,” said Poundland trading director Tim Bettley.

“We’re already the go-to destination for our customers for groceries, health & beauty and household products, as well as Pep & Co clothing and homeware, so it makes sense to give them the convenience of adding their drink of choice to their shopping basket.”

Last month Poundland launched a new home range, including towels, cushions, throws and ornaments. All its 800-plus stores have benefited from the range, while 120 larger branches have gained dedicated new displays for it.