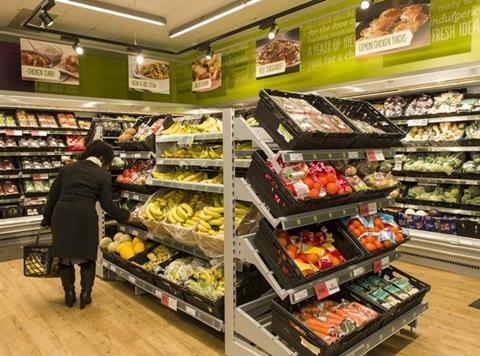 The Co-operative Food has embarked on a £125m fresh fruit and veg price-slashing programme this week in an effort to change consumers’ perception that convenience stores mean premium pricing.

The initiative comprises the Fresh Three – an ongoing revolving promotion offering approximately half-price on three products every three weeks, starting on Wednesday (17 June) with carrots, down from 69p to 39p, lettuce, down from 90p to 39p and cucumber, down from 45p to 39p.

“This is part of our pricing commitment we started a while ago that will continue to bring down the price of fresh food in convenience stores because historically there has been such a big premium attached to buying fresh food if you want to do a top-up shop,” added Hood.

“As we know, customers’ missions are changing so that they shop little and often and therefore this is to further encourage that and get them confident they can top up on fresh food as well as cigarettes and newspapers,” he said.

However, Hood admitted the initiative had “a heavy hit on my profitability…we are paying for this as a business as the Co-op. It’s one of those we said we’d invest in…out of our P&L.”

He said from trials undertaken in 125 stores in Wales since February, the price cuts had “a halo effect” on the rest of the business and had an impact on customers’ perception of the store as a fresh food retailer.

It got them into the stores and they made associated purchases and started to look at the rest of the fresh foods, such as pizza, protein or bakery.

The trial stores were now piloting discounts on more niche products, such as kiwis, to persuade customers to trade up to new things.

“We don’t want a fresh promotion that gets tedious. We want to give them the opportunity to buy into citrus, deciduous and salad,” Hood said.

Hood confirmed that the business was separately in the early stages of trialling “Super Low Prices” on more than 100 everyday essentials, which The Grocer reported earlier this month.

Hood stressed that all price cuts were aligned with improving quality and helped customers reduce waste because of a propensity to shop little and often.