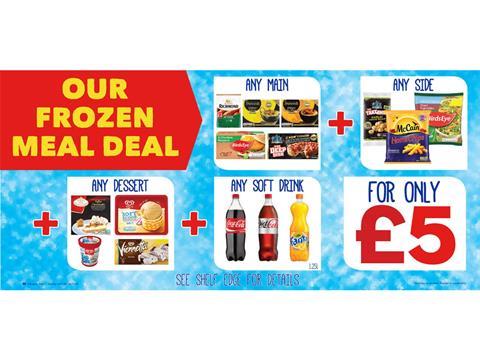 One Stop is running a major new frozen food deal for the next couple of months offering ‘any four for £5’.

The promotion, which launched on 9 September and will run for eight weeks in two separate promotion periods, includes any main, side, dessert plus a 1.25-litre soft drink, taking the total number of products involved to 66.

One Stop said the frozen meal deal was a response to consumer demand and the success of its existing lunchtime deal of three for £3 and its evening meal deal offering any three items for £6 within chilled ready meals, side dishes and desserts.

Lizzie Reynolds, One Stop customer director, said the Tesco subsidiary’s customer focus groups had regularly shown that there was an appetite for a frozen offer, to complement its other meal deals.

“Our chilled evening meal deal is already a firm favourite - over a third of those who buy any product in the deal buy into the meal deal itself. It’s clear that customers welcome the great value that our meal deals provide,” she said.

One Stop also has a rugby theme running until the end of next month to make the most of the Rugby World Cup.