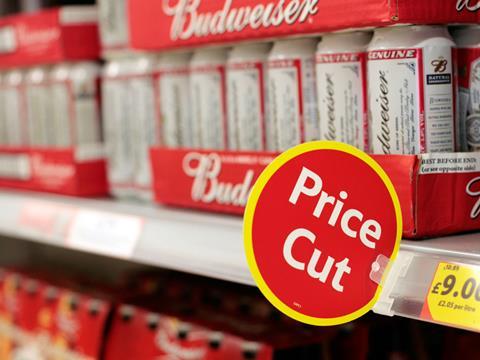 Sainsbury’s is leading the way among the supermarket price-cutters as the grocers head into the crucial Christmas trading period.

Sainsbury’s has cut its average year on year prices by more than its competitors over the past year as it sought to close the gap with the discounters and its rivals with a sharper pricing profile.

Each of those supermarkets saw their annual rate of deflation ease from the figures recorded in the month to 1 November, but the overall GPI figure remained stable as Asda’s annual rate of price decreases went from -1.1% to -1.7% during the month.

The overall GPI figure, collated for The Grocer by Brand View from almost 63,000 SKUs across the big four, remained at -2.36% - exactly the same as the month to 1 November and the joint second-highest level of deflation recorded in 2015, behind the -2.53% recorded in the month to 1 April.

The GPI has been in negative growth in every month since the month to 1 June 2014 and has been at -2% or over for each of the past five months.

Sainsbury’s has now recorded the highest level of annual big four price cuts in each of the past three months. This contrast with the picture this time last year when it recorded the lowest levels of price cuts (including Waitrose) in the month to 1 December 2014 at just -0.7%.

Prices at Waitrose, not included in the overall GPI figure, were flat year on year.

For the second month running all 14 categories tracked by the GPI recorded year-on-year price falls, dominated by big falls in the price of perishable goods. The bakery category saw the heaviest price cuts in the year to 1 December, falling 3.9%. Significant price drops were also seen in meat, fish & poultry (-3.6%), dairy (-3.5%) and deli (-3.4%).

Overall prices fell 0.5% on a month-on-month basis, with meat, fish and poultry (-1.6%) and dairy (-1.9%) seeing significant price drops since the month to 1 November 2015. The biggest month-on-month price drops were seen in frozen (-2.5%), while dry grocery prices rose by 2% during the period.

The month to 1 December also saw a big drop in the price of alcohol, with the category’s average prices down 1.7% month on month as the grocers readied Christmas offers and the impact of Tesco’s wine price simplification came through.

Deflation seems unlikely to easy any time soon, given the continued fall in global oil prices that has underpinned food price falls. This week Brent crude oil hit its lowest level since 2009 as OPEC refused to cut production despite the low price. Brent crude has dropped below $40 a barrel from over $70 a barrel in May.