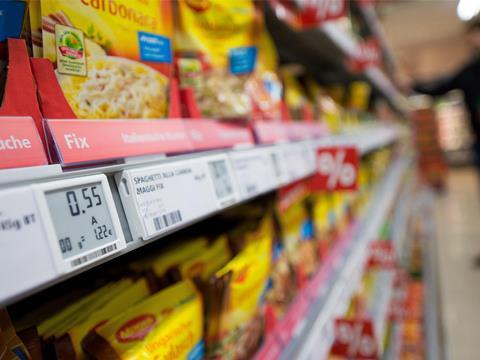 Having put its accounting woes firmly in its past, Tesco found itself at the centre of a fresh new scandal this week. A BBC investigation found dozens of stores had out-of-date promotional offers on the shelves, resulting in its undercover reporter (and no doubt plenty of customers) being consistently overcharged.

The retailer did its best to dampen negative PR by frantically ordering staff to manually check shelf prices at all 3,500 UK stores. But experts tell The Grocer the issue goes much further than just Tesco and is endemic across the sector.

So how do supermarkets ensure greater transparency? And could new but expensive technology be the answer?

As well as issuing an unreserved apology to the unknown number of customers that the BBC’s Inside Out programme claimed on Monday had been ripped off, Tesco clearly believes tightening up existing procedures is the answer. It has urged all its staff to “re-focus” on its manual price label routines in store, with duty managers ordered to take control of all complaints over labelling..

But the BBC documentary heard evidence from secretly recorded Tesco staff suggesting cuts and lack of manpower on the ground was the root cause rather than incompetence.

According to its survey for The Grocer of 200 big four store managers in September, 50% of Tesco managers said they needed “more” (30%) or a “lot more” (20%) labour to ensure promotion compliance.

However, Tesco’s problems were not as bad as others, with 30% of managers at Asda and Morrisons saying they needed a “lot more” labour. Harper claims store managers are inundated by “ever changing offers and price matching” of the supermarkets.

Separate research by Storecheck among 1,000 consumers found 16% of Tesco customers were not clear about the price or value of what they were buying, despite its moves to more simple pricing, with a similar figure at most of its rivals, although the figure at Asda rose to 24%.

Bryan Roberts, insights director at TCC Global, believes Tesco was “just the unlucky one to be caught out”. “If you go to any major retailer there will inevitably be discrepancies due to the scale of operations and the potential for human error.”

“The revelation that price promotions are now also not being monitored correctly raises serious concerns not only for consumers but for the way Tesco is operating in the current market, making a mockery of their position,” Trevill claims. “Being overcharged due to a fault in tills is simply not acceptable in any retail situation and cheats consumers.

“Trading Standards should be looking at this problem as mis-selling is a serious issue and we would expect fines to be introduced,” she adds.

Lawyer Katie Vickery, a partner at Osborne Clarke also claims supermarkets are in for a rude awakening if they think the storm will just blow over.

Vickery points to new guidance on pricing practices launched by the Chartered Trading Standards Institute in December, brought about by factors including the Which? super-complaint on supermarket “dodgy deals”, and savage cuts to local authority budgets.

“The new guidance puts the onus very much on retailers. Instead of the previous set of well-known rules, new guidelines mean retailers must have written procedures in place to ensure price promotions are fair, and they have to prove they work. Well, look at what the BBC has exposed.

“The new rules may be less prescriptive but they have completely changed the legal threat to retailers and there is a good chance Trading Standards or the CMA will take action on what would be viewed as a criminal offence.”

So could technology be the answer? Electronic shelf labels (ESLs) - technology that enables retailers to change prices across thousands of stores at the flick of a button - have so far being ignored in the UK, despite widespread use in European hypermarkets like Carrefour and Leclerc.

In December 2013, Tesco announced trials of ESLs, which then CIO Mike McNamara claimed would “change shopping for the better”. But sources told The Grocer the labels were dismissed as simply too expensive. “For a retailer as big as Tesco the cost would be running into tens of millions,” says one source. “However, when you consider the manpower Tesco must put into manually changing prices and promotions in store, it’s staggering - and even more staggering when it has to check it all again after making a monumental mess of it.”

“It’s safe to say if supermarkets weren’t seriously looking at ESLs before, they will be now.”

Mark Duckworth, technical boss at Herbert Retail, claims the potential for ESL to link to smartphones with latest offers, help shoppers navigate the store through geo-location and display interactive promotions is the big opportunity. “Yes you have zero pricing errors between POS & Shelf Edge, bi-directional price verification and the ability to ensure transparency of promotional activity but you have all of that as a by-product of improving the customer journey in stores.

“That’s where you get the real value.”

And with a potential legal threat on the horizon, could the price of failing to use this technology be even higher?As the IPM’s Trevill says: “It is possible that new technology like electronic shelf pricing might help with promotion accuracy. However, the fact is that retailers should be doing this already. They have no excuses.”