Will the return of inflation revive promotions? 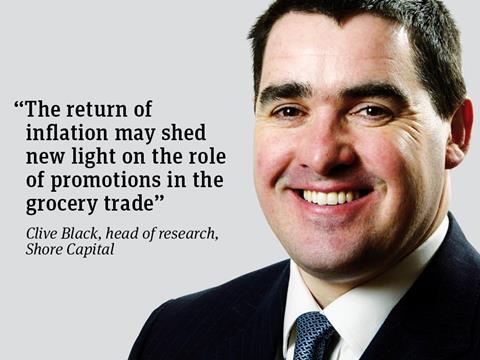 Inflation is back in the UK food system, confirmed by the ONS CPI data for February 2017. That return of inflation has been reasonably well flagged, reflecting rising crude oil prices, the material weakening of sterling and commodity price rises. All the while the superstore groups in particular are still seeking to make commercial life more robust for the discounters, which now account for about one in eight pounds spent by the British on groceries.

Inflation is generally perceived by management to be a virtuous feature for an industry, despite what their rhetoric may say, as they certainly prefer gentle price rises to deflationary forces, as do their investors. However, inflation can only be virtuous up to a point and the misery brought by the supermarket groups upon themselves through much of this decade had much to do with sustained over-inflation, and not being in touch with their customers, so allowing the LADs in.

While we expect food inflation to be in the system for much if not all of this year, the supermarkets will be a more determined and effective sieve, an arbiter of value for households.

The return of inflation may also shed new light on the role of promotions in the grocery trade, noting that while promotional participation is very low in the LADs compared with the superstores, those LADs do actually quite extensively use old-fashioned high-low tactics. In this emerging trading environment, also noting that it was promotions that picked up the slack of delivering value to shoppers in the last major inflationary period (2006-2013), whether the customer arguably wanted them or not, it is not ridiculous to suggest that just as the industry pats itself on the back for repositioning promotional participation downwards, so seeking to make them more relevant to customers, that promotions may be seen by some suppliers as the ticket to yield a better perceived value quotient as prices rise.

The industry would do well to keep close to shoppers, their mood, as their living standards maybe erode.

Promotions will have a role in this trading matrix for sure but a return to the ‘bad old days’ will just return the free lunch ticket to the discounters.