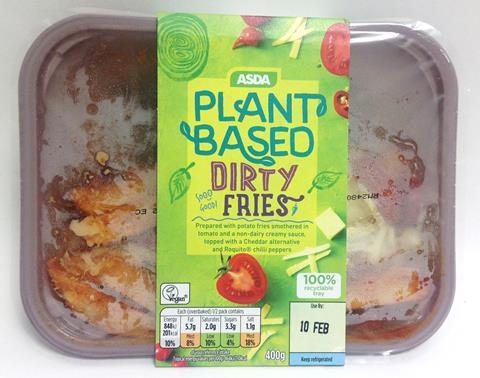 What: Plant Based Dirty Fries

Why: Dirty Fries launched as part of Asda’s Plant Based range which rolled out in January (or Veganuary). The 48-strong range is approved by The Vegan Society and spans chilled, frozen and food-to-go categories. These Dirty Fries are smothered in a tangy, non-dairy creamy sauce topped with cheddar alternative and Roquito chilli peppers.

Consumer verdict: Shoppers gave mixed reviews on the levels of spice, with it proving too much for some who declared the dish “far too spicy to enjoy” and “way too spicy for me”. The texture of the fries also received criticism, with reviewers saying it was “too mushy” and “the chips were too soft”. Just 11% of reviewers gave the product five stars, with feedback including “great size portion” and “great spicy flavour”. Twenty-four per cent gave Dirty Fries one star, with one disappointed reviewer saying, “awful presentation, a depressing meal, if I could give zero I would”.