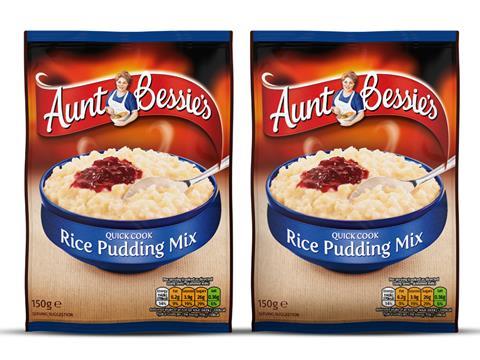 Why: Last year, sales of traditional hot desserts rose in Aldi, Lidl and bargain stores [Kantar Worldpanel 52 w/e 24 May 2015], while the overall market for puddings remained flat. This rice pudding mix forms part of the expanding Aunt Bessie’s dessert portfolio. The brand, which recently spent £6m on sponsorship deals, says the product should be combined with milk and either microwaved or heated in a saucepan to make three servings. Cinnamon and nutmeg flavours are also available.

Consumer verdict: More than half our panel ­considered this a new and different product, but only a third felt it was better than other products. There was a clear divide between the North, where it was described as “creamy and homemade”, and the Midlands and South, where consumers said it was “too milky” with a “rubbery texture”. Though our testers claimed the product was “easy to make”, it scored below the category norm of 39, with 42% saying they’d never buy it.