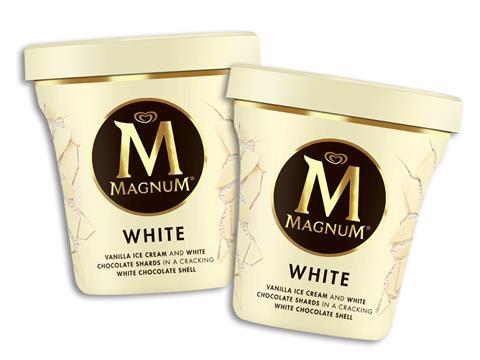 Why: Ice cream’s value is soaring. Take-home sales rose by 7.2% last year to £969.2m due to price increases - though volumes were up just 1.1% following underwhelming summer weather [Kantar Worldpanel 52 w/e November 2017]. Amid such success, Unilever took a second run at Magnum tubs after the original trio disappeared from shelves in 2016 on the back of disappointing sales. Classic, Almond and White rolled out comprising vanilla ice cream filled with shards of chocolate and topped with a thick chocolate disc.

Consumer verdict: This ice cream was wildly popular with our shoppers, bagging maximum marks for innovation and scoring above the norm in all other key measures (even health). Pre-trial interest was high, fuelled by the need to gently squeeze the pot to break the chocolate disc before serving. Almost everyone was positive upon tasting, with praise for the “creamy” texture, “lovely flavour” and “good value”. The most vehement complaint our consumers could muster was that the ice cream demanded to be eaten in a single ­sitting, such was its appeal.