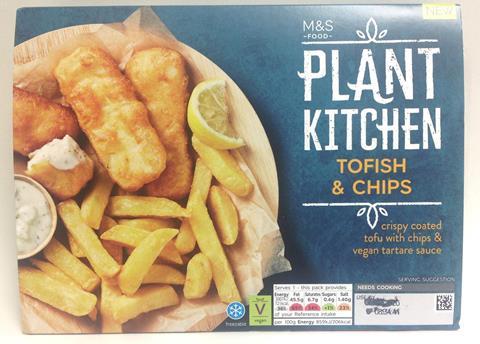 Why: Tofish & Chips launched in January 2020 as part of an expansion of M&S’s Plant Kitchen range of vegan food. Plant-based sales flew across the mults, amounting to Veganuary’s biggest year yet, which saw some 400,000 people take the pledge to go vegan for the first month of the year. This dish comprises crispy battered tofu goujons, chips and a vegan tartare sauce. Per 100g it contains 206 calories, 15.6g carbs, 5.9g protein and 13g fat.

Consumer verdict: The dish received praise for its “generous” portion size and attractive look, however there was general disappointment with the texture and taste of the ‘fish’ as it was described as “rubbery”, “greasy” and “bland”, while the tartare sauce was “not good”. Five stars were given by 11% of reviewers, who praised the “good size” and “nice golden batter”. Meanwhile 17% of reviewers gave the product one star.