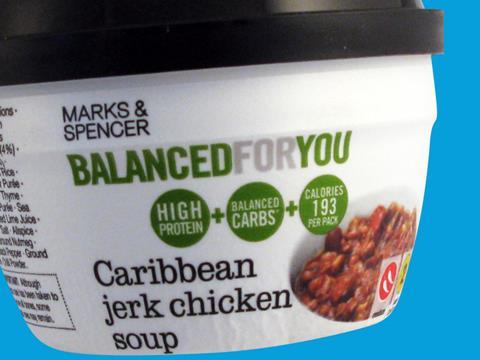 What: Balanced For You Caribbean Jerk Chicken Soup

Why: This microwaveable single-serve soup is part of the M&S Balanced For You range that was originally launched in January 2010. All the products in the range are rich in protein, and provide a moderate carbohydrate level from sources such as beans, pulses and vegetables.

Consumer verdict: Some testers felt the pack design might be overlooked on shelf. A degree of polarisation was noted after sampling, with some regarding the soup as “hearty and flavoursome”, while others were less impressed and responded with “flavour too strong”. These differences in opinion affected ratings across many measures, and the product scored slightly above the category average overall. The price point also restricted purchase potential and - though there was a marked increase in purchase intent after testing - frequency of purchase was kept to an occasional basis, with more than 40% claiming they would be more likely to buy if on special offer.