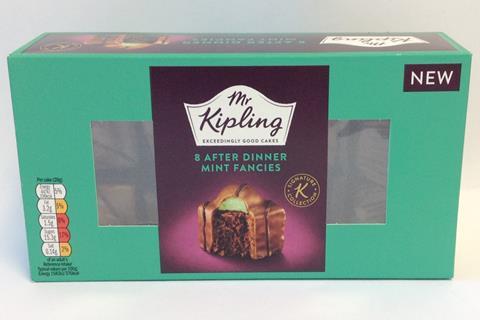 What: After Dinner Mint Fancies

Why: These cakes were launched alongside a swathe of new posher snacks by Mr Kipling in September, aimed at adult cake lovers. The brand dubbed them “an indulgent treat for those moments when shoppers want to treat themselves”. The launch came on the back of a solid year for Mr Kipling, which grew its supermarket value sales 3.6% to £158.5m last year [Nielsen 52 w/e 7 September 2019].

Consumer verdict: Nearly half of our shoppers gave the cakes five stars, calling them “really nice”, “just lovely” and remarking on their “gorgeous mint flavour”. At the other end of the scale, 10% of shoppers gave the product one star, with the most common opinion being that the mint flavour was “like toothpaste”. One of the one-star reviewers said the texture was “too fluffy”. Sixty-nine per cent of shoppers said the cakes were fit for a weekend treat, while 43% said they’d share them with friends and family.