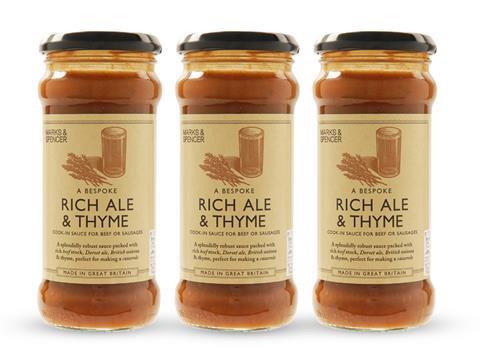 What: Rich Ale & Thyme Cook-In Sauce for Beef or Sausages

Why: Cooking sauces plummeted last year. Value sales fell 4.8% (£30.3m) to £600m, on volumes down 4.7% as Brits increasingly preferred to cook from scratch [Nielsen 52 w/e 8 October 2016]. This option from M&S uses its British provenance to try to stand out from a multitude of own-label competitors. It is described as “a splendidly robust sauce packed with rich beef stock, Dorset ale, British onions & thyme”.

Consumer verdict: Despite many of our shoppers regarding the price as too high, the sauce impressed upon tasting, with consumers calling it “tasty”, “rich”, “comforting” and “full-bodied”. A few complained about a lack of ale flavour, but this was the only negative criticism about the product’s taste. More than 90% of our triallists said they would consider buying, though mostly on only a monthly or occasional basis due to the premium price, which lowered the overall score.