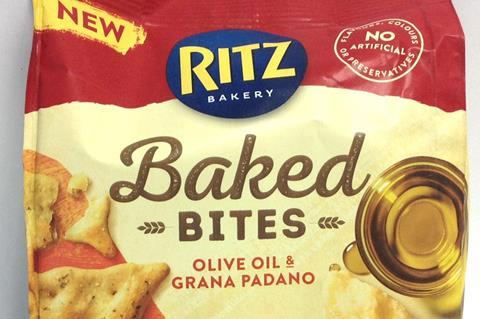 Why: Offering an upmarket, Italian spin on the much-loved crackers, these Baked Bites were launched under Mondelez’s Ritz brand in October 2019. They contain olive oil and grana padano cheese as well as salt and dried parsley. Per 100g they contain 454 calories, 66g carbs and 16g fat. Ritz has had a solid year in the supermarkets: sales of the snack brand grew £2.1m (13.9%) to £17.6m last year [Nielsen 52 w/e 7 September 2019].

Consumer verdict: Forty-four per cent of our shoppers gave the product five stars, declaring them “moreish” and “very tasty”. A further 44% gave the biscuits four stars, with feedback including that they were “good value for money”, had a “crisp texture” and were “easy to eat”. One shopper gave the biscuits one star, saying they were “tasteless” and “very dry” with “no cheese flavour”. Seventy-eight per cent of shoppers said they would share them with friends and family, and only 2% (one shopper) said it wasn’t for them.