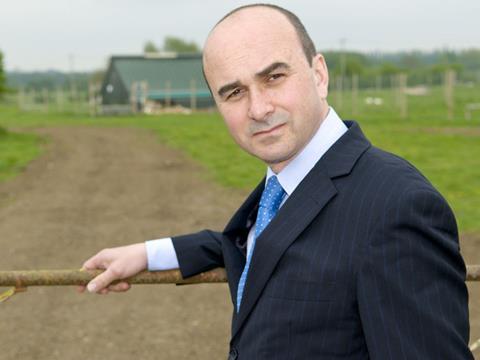 A minister from the Department of Agriculture had turned up on his Hampshire doorstep to convince Roberts to make the switch from grazing cattle and chicken on his land to intensive indoor production.

Lauded as wildly more efficient, factory farming had soared in popularity since the end of the Second World War, but Roberts was having none of it.

“I think that’s what did it for him,” Compassion in World Farming CEO Philip Lymbery tells me. “The wise man from the Ministry knocking on the door and giving his wise advice was no accident. He realised factory farming was lapping at his door as well as rising all around him. It was time to come out of farming and pin his colours to the mast.”

Potted CV: Joined CWF in 1990 as a campaigns assistant. Left in 2000 to lead wildlife tours. Did comms for World Society for Protection of Animals before rejoining CWF as CEO in 2005

Where did your passion for animal welfare come from? It started with my mother. She always taught me not to harm ladybirds and bees because they do us no harm. And my grandfather instilled in me a passion for wildlife as a small boy

What do you get up to in your spare time? I’m a wildlife enthusiast so I do a lot of walking, photography and bird watching

What’s your favourite bird? I’m in love with the barn owl

What’s been the high point so far? Knowing the decision we took 10 years ago to focus on engaging with food corporates in a positive way benefits one billion farm animals every year

Is there anything you regret? There was a horror moment where we turned up at what we believed was a supermarket with all of our people with placards, only to find it was a garage. The TV were coming in 10 minutes!

Five decades, 100 staff and 710,000 global supporters later, 90% of UK pigs are still factory farmed, “kept in conditions that are barren and overcrowded and of utter depravation”, along with 80% of broiler chickens, 50% of laying hens and “most” turkeys, according to Lymbery. So does the CEO, at the helm since 2005, think they’ve had an impact? Or is this an epic fail?

“Sadly, factory farming is still the predominant way of producing animals in this country, in Europe and across much of the world,” he admits. “But I think we’ve made huge progress. In the 1960s and 1970s, it was a hard job even to argue the bleeding obvious. You had scientists and vets saying that things like the veal crate, where tiny calves couldn’t turn around for their six months in existence, weren’t cruel. Peter’s response to that is ‘a damn fool can see it’s cruel, we don’t need science to prove the point’.”

It took until 1997 for the EU to officially recognise all animals as sentient beings, after “pioneering scientists broke this new frontier of animal behaviour and welfare science”. The breakthrough came three years after the British banned veal crates, and 15 years before “the very worst of the barren battery cages” disappeared from EU producers. “There’s now widespread interest from the corporate world, with food companies becoming much more receptive and proactive when it comes to welfare,” Lymbery says. “For example all the major UK supermarkets have either taken cage eggs off their shelves or have pledged to do so.”

They still stock barn eggs where hens can be crammed in nine per square metre though. “It’s part of a journey. We encourage companies to embrace change and move from bad to better, and then transition to best.”

It’s a pragmatic approach. The same one that stopped the softly spoken Lymbery putting the full force of the CIWF against plans to slaughter 1,000 pigs per week on a 30-acre ‘mega farm’ in the Derbyshire village of Foston in 2010. Broadly, his view is that large-scale intensive farms are “wasteful and inefficient” and “provide very poor scope for decent animal welfare”. It’s why the organisation campaigned voraciously against plans for a US-style mega dairy in Nocton the same year.

“But the reason we didn’t come out against the Foston proposal was because the conditions Martin Barker was proposing to use - free farrowing systems indoors, making sure pigs were provided with straw bedding, that they didn’t have their tails docked - would’ve been a considerable step up from the standard intensive production for pigs.

“What he was not doing was proposing a nirvana for higher welfare pig production, but he was proposing something that, in my view, was significantly better than the bogstandard factory farming that goes on across much of the pig industry.”

It’s also why - while the likes of PETA have adopted an uncompromising vegan-only view - the CIWF “don’t demonise meat” and have largely laid down their placards in favour of sitting down face to face with industry, handing out their Good Farm Animal Welfare awards this week to 96 companies that have prioritised welfare.

“If you scroll back to the 1990s we’d stand outside company headquarters with banners and pigs in cages and we’d shout and try and persuade companies that way. But very often we got nowhere,” smiles Lymbery. The new approach “really led us through many doors, to many conversations and to a lot of change. In the last 10 years the companies we’ve worked with have made commitments that are set to benefit one billion animals every year.”

Not that Lymbery is hesitant to criticise industry where he thinks it’s due. He has zero time for those that claim factory farming can be better for the animals. “If they were really proud of what they did, why wouldn’t they say intensively produced on the label? If they were really proud, why not say ‘this meat comes from animals that have never seen daylight’ - why don’t they do that? Because they know it wouldn’t sell. Why wouldn’t it sell? Because it’s not the right thing to do.”

Neither is he impressed by the Red Tractor brandished as proof of high welfare. “In my analysis Red Tractor all too often assures little more than compliance with minimum legislation and government guidelines when it comes to welfare. I would encourage consumers to look for meaningful assurance schemes such as the Soil Association or RSPCA assured.”

For all his collaborative work with industry, Lymbery hasn’t compromised on his lofty ambitions to eradicate factory farming by 2050 either, regardless of the long uphill slog of the past 50 years. How does he plan to do it? “By returning farming animals to their ecological niche, with land-based mixed rotational farming systems.” And he insists it isn’t a pipe dream. “You can go to Kingsclere Estates in Basingstoke, which is 10 times bigger than the average UK farm. It used to be wall-to-wall chemical based arable and now the farmer there has reintroduced grazing animals as part of a mixed rotational system. They’re not fed a single grain.”

He also believes that for all its “severe challenges”, Brexit presents a “phenomenal opportunity for Britain to be a world-beating pioneer in this land-based pasture raised farming.”

“Change will come. It’s just a matter of whether people and societies choose that change, or whether it’s forced upon us.”