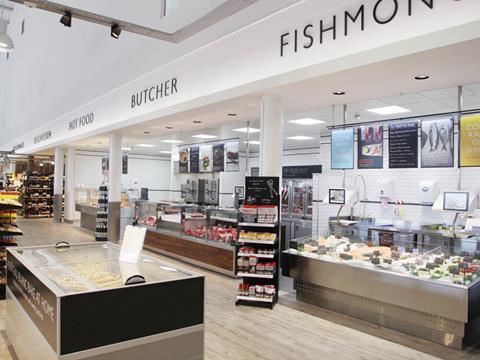 Booths has opened its 32nd store, in Burscough, Lancashire, as part of an ambitious rollout programme that will see it open five new stores in the next 18 months.

The 30,000 sq ft store, which has created over 60 jobs, contains a café, fresh food counters including a butcher; fishmonger; delicatessen; hot food and cheesemonger. Hand-carved smoked salmon and fresh pasta are made fresh in store every day.

In addition, the retailer is using the store to trial a new way of showcasing beers, wines and spirits.

Booths is known for its positioning around artisan quality and the sourcing of local and seasonal produce. At least 25% of its ranges are sourced from its Northern heartland.

“We work hard to develop strong and meaningful relationships with artisan suppliers both locally and globally,” said chairman Edwin Booth.

“Retailing exceptional food and drink is the essence of Booths, and coupled with great knowledge and service is what sets Booths apart from the crowd and marks us as special.”

Booths was named Independent Retail Chain of the Year at the recent Grocer Gold Awards.