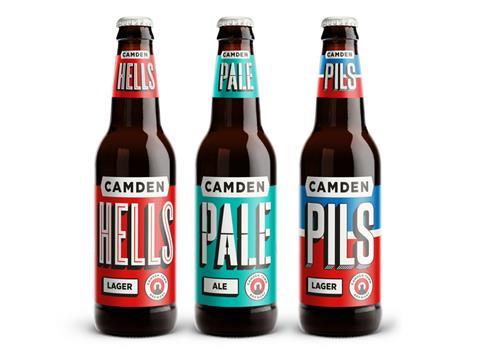 Camden Town Brewery, the craft beer maker that suffered a slew of pub delistings after selling up to AB InBev last year, has unveiled plans to more than quadruple sales by 2020.

New-look packaging rolled out this week, along with Camden’s first-ever ad campaign and a sampling push aimed at winning over drinkers before the opening of a new £20m brewery in Enfield next April.

The new facility would allow the brand - currently in Waitrose, M&S and Majestic - to build its off-trade presence, said MD Mark Turner, speaking exclusively to The Grocer. “This will be a game changer for us in the off-trade,” said Turner, former head of launches at Innocent Drinks. “One of the main reasons we haven’t been so big in the off-trade is because we just haven’t had the capacity. Our turnover for last year was £15m. By 2020 we’re looking to have grown by four or five times that.”

Since joining in February, Turner has overseen the doubling of the sales force and opened dialogue with the supermarkets with a view to greater distribution.

After Camden’s £85m sale to AB InBev, the world’s biggest brewer, the brand came under fire from craft beer fans for ‘selling out’. One correspondent in The Guardian suggested the deal had “ruined craft beer for everybody”.

Turner concedes there was a backlash. “The impact was really with the craft guys,” he said. “We lost 60 bars but since then we’ve gained over 120. We’re now in 2,800 pubs and bars, so there’s still a long way to go in the on and off-trades. The bigger retailers tend to like the fact we have the security to grow and build the business.”