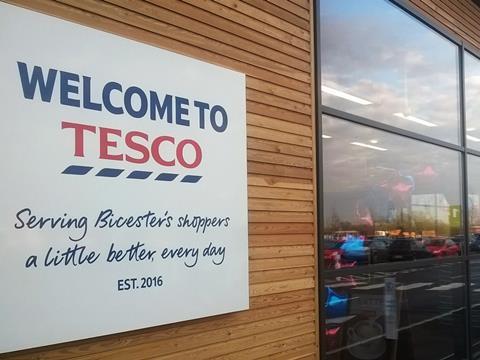 As Tesco revealed it had closed more selling space than it opened this year, exclusive figures for The Grocer show the extent to which its supermarket construction projects have ground to a halt.

Tesco’s property slowdown is particularly dramatic compared with the discounters. Barbour ABI research shows 2015/16 saw Aldi and Lidl ramp up their property development across the UK, with more than 100 supermarkets constructed between them in the year. Tesco, meanwhile, built just four.

In its full-year results this week, Tesco said it had seen a net reduction of 1.2 million sq ft of supermarket space, of which over half (800,000 sq ft) was in the UK and the Republic of Ireland.

Last year, Tesco closed 43 non-profitable UK supermarkets. It either constructed or started 63 supermarkets between 2010 and 2016, but just 6% of those were started or finished in 2015-16. Recently finished projects include the new Bicester store, which opened this week.

In contrast, 50% of the 70 supermarkets built by Lidl were started or finished in the same year. Rival discounter Aldi has expanded even more aggressively. Since 2010, it has built or started 180 supermarkets, almost as many as Morrisons, Sainsbury’s and Tesco combined; 76 were built in the past year alone.

Among the traditional supermarkets, Sainsbury’s showed the biggest recent growth in stores, starting or finishing 10 in 2015/16, whereas Asda built just three in the year, out of the 31 it has opened in 2010-16.

“With Tesco closing more stores than opening in 2015 for the first time in many years, alongside the rapid opening of stores from Aldi and Lidl, the power struggle and market share within the industry looks to continue as the ‘big four’ now seems to be shifting to the ‘big six’,” said Barbour ABI lead economist Michael Dall.