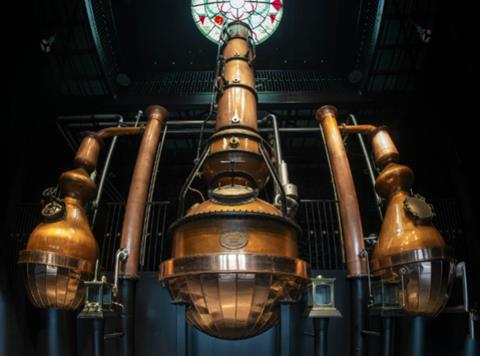 Hendrick’s Gin has opened its newly expanded distillery in Girvan, Scotland – the result of a £13m investment in response to the worldwide gin boom.

Called the Hendrick’s Gin Palace, the facility was the premium brand’s “most significant development since launch in 1999” said owner William Grant & Sons. It has doubled capacity from one million litres a year to two million “to meet the voracious global demand for Hendrick’s”.

Featuring a walled garden and “Victorian-inspired palm house”, the distillery boasts two hothouses to cultivate “a plethora of unusual botanicals and flora”, a lecture theatre, a bar and “a curious flavour library”.

Two new still houses are home to a total of six stills, including an antique copper pot Bennett still from 1860, which have been active for almost a year. There is also a laboratory created to give Hendrick’s master distiller Lesley Gracie greater freedom to experiment with and conceive new variants.

Previously, Gracie had “the opportunity to explore and experiment on a small scale” she said.  “I’m thrilled and excited to take full advantage of our wonderful new distillery and begin working on a line of experimental liquids.”

The Hendrick’s Gin Palace – formerly known as the Girvan Distillery – was “intended to inspire curiosity, open minds and serve as a platform for invention” according to Pamela Selby, global brand director for Hendrick’s.

It represented “the confidence we have in the brand that helped to kick-start the ‘ginaissance’ and the leading role it has played ever since” she added.