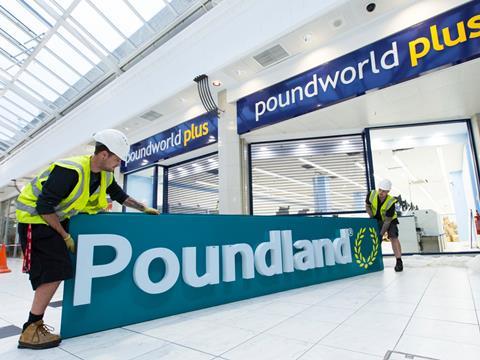 Poundland is looking to recruit former Poundworld staff at its new loctations, including this store in East Kilbride

Poundland is moving into 20 former Poundworld stores and looking to recruit staff who lost their jobs at the sites.

Most are expected to reopen as Poundland branches by October, starting with three in Scotland – in Edinburgh, East Kilbride and Ayr – and one England, in Tyne & Wear’s Killingworth.

’The great news is that we are looking for any ex-Poundworld colleagues who previously worked in any of the stores that will now become Poundland stores, and would like to return as many of those colleagues to employment with us as possible,’ Poundland’s retail director, Austin Cooke, wrote on LinkedIn.

In June, Poundland set up a dedicated email address for Poundworld staff, offering them guaranteed interviews after Poundworld’s collapse into administration.

More than 400 jobs will be created by the new stores according to Poundland. Eight of the 20 are to include a Pep&Co clothing outlet.

Poundland UK & Ireland managing director Barry Williams toook a swipe at landlords over rent costs as the news was announced.

“We’re trading strongly and stores with a Pep&Co fashion store are a hit with customers,” he said. “That’s why we’re keen to find larger sites that enable us to bring our widest ranges to more high streets across the country.

“However, we can only do this if landlords really change their expectations about the total cost of occupation to reflect the new realities of UK retail.”

Earlier this week The Grocer revealed Poundstretcher was seeking the leases to 200 former Poundworld stores from the landlords, having already reopened seven under its own banner.

Iceland agreed to acquire 19 of the leases from Poundworld’s administrators Deloitte in August.

Poundworld had 335 stores and employed around 5,100 people when it went into administration on 11 June.