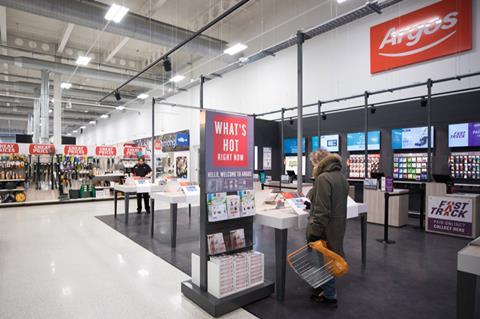 Sainsbury’s has announced it will close stores, as it posted its second-quarter results this morning.

The closures are to include supermarkets, convenience stores and Argos outlets, as part of a store estate review.

The review will result in 10 new supermarkets opening and 10 to 15 closing; 80 new Argos in Sainsbury’s and 60 to 70 Argos closures; and 110 new convenience stores and 30 to 40 closures, the retailer said in its trading statement.

Sainsbury’s has not yet commented on whether the Argos closures could include high street stores.

Sainsbury’s posted a 0.2% drop in second-quarter like-for-like sales excluding fuel, representing an improved performance from the 1.6% sales drop in the first quarter.

Sainsbury’s said it had seen an improvement to trading relative to the market, particularly in grocery where sales were up 0.6% in the quarter.

General merchandise sales declined by 2% in the period, but clothing sales were up by 3.3%.

Sainsbury’s said it expected store closures to deliver an ongoing net operating profit benefit of £20m per year, though one-off costs related to the closures and impairments would be £230m to £270m, of which the cash cost would be £30m to £40m.

Sainsbury’s was due to host a capital markets day today to update shareholders on its strategy. It said the key points would be investing in its customer offer; continued improvement in grocery value; fit for future store operating models; and confidence about the ability to fund this investment.

Sainsbury’s will say it has a “unique opportunity” to structurally reduce costs by £500m over five years, as it brings its business together and finds other cost savings to cover the impact of inflation.

Additionally, Sainsbury’s will launch a five-year plan for its financial services arm, including an immediate stop to new mortgage sales.

It will also cease to make any more capital injections into Sainsbury’s Bank after the £35m in 2019/20, reduce its cost/income ratio to 50% and look to double its underlying profits and return of capital.

A new longer-term asset-backed pension plan has also been agreed, “providing greater security to the scheme”, reducing cash contributions immediately by £50m a year and cutting its valuation deficit to £538m, from £1.06bn in 2015.

“Sales momentum was stronger in all areas and we further improved our performance relative to our competitors, particularly in grocery,” said CEO Mike Coupe.

“We have focused on reducing prices on everyday food and grocery products and expanding our range of value brands, which have been very popular with customers. At the same time, we are investing significantly in our supermarkets, driving consistent improvements to service and availability.

Sainsbury’s said first-half underlying profit before tax would reduce by £50m year on year due to the combined impacts of the phasing of cost savings, unseasonal weather against a strong comparative period last year and higher marketing costs.

However, in the second half the supermarket expects to benefit from the annualisation of last year’s staff wage increase and a normalisation of marketing costs and weather comparatives. Therefore, while retail markets remain highly competitive and the consumer outlook remains uncertain, the supermarket said it remained on track to deliver full-year 2019/20 underlying profit before tax in line with consensus expectations.