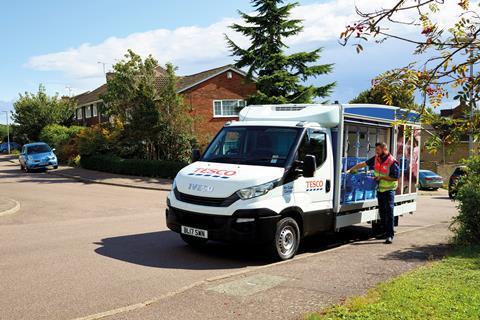 Tesco plans to almost double its £3.2bn online sales with a network of urban fulfilment centres (UFCs) being launched in place of excess retail and warehouse space across its stores.

He said at least 25 stores would be repurposed within the next three years, with their excess capacity used to make space for machine-picking fulfilment centres, able to ramp up Tesco’s capacity for online delivery options.

The first three stores are due for rollout by next summer, with the first in West Bromwich by March, Tesco said.

The idea of the new UFCs was raised by Tesco at a Capital Markets Day in June but has emerged as a major weapon in its battle to head off the threat of Amazon and the growth of “last mile” deliveries.

Between 10,000 to 15,000 sq ft of space would be converted in each of the stores, Lewis said, and the operations would be “fully automated.”

He said Tesco’s vast store network and spare capacity in many stores gave it an advantage over rivals looking to build similar online flexibility.

“We have a three-year plan in which we will roll out at least 25 of them,” he said.