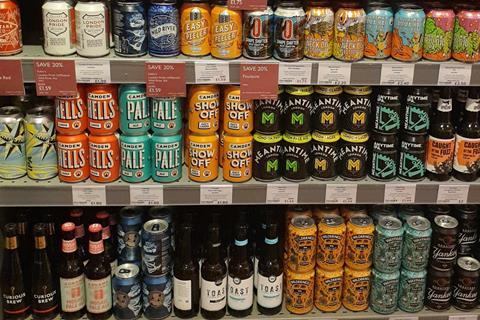 Waitrose has significantly upped its craft beer game, drafting in a fresh host of exclusive and more experimental brews.

The retailer has added more than 70 new beer and cider SKUs, with debut appearances for the likes of Tiny Rebel, Dark Star and Northern Monk.

The update also includes a range of beers Waitrose is signposting as ‘Limited Edition’ on shelf, which are not yet listed on its website, including Fuller’s Black IPA, part of the London brewer’s small-batch ‘Pilot Series’ range, and two beers from Lost & Grounded.

New low and no-alcohol beers have joined its roster too, including Brooklyn’s recently-released 0.4% abv Special Effects lager, and Adnams alcohol-free version of its Ghost Ship ale.

Muddy Wellies Ale, a beer created by students at the Royal Agricultural University in Gloucestershire, brewed in collaboration with The Friday Beer Company, won a space on shelf. Ten pence from every sale will be returned to the university to help launch students’ business ideas.