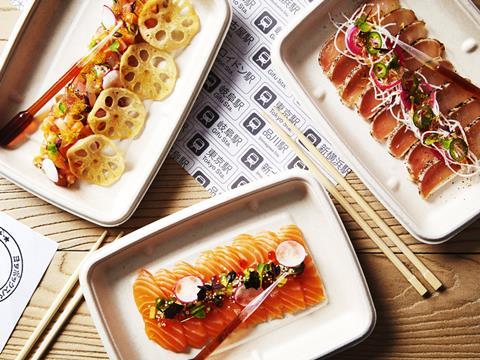 The news came as Yo reported UK like for likes up 1%, driven by an increase in food to go and delivery

Japanese food giant Yo is poised to roll out manned kiosks in Tesco stores following a “very successful” trial.

A Yo spokeswoman said the manned kiosks would be rolled out to other Tesco stores soon and would not necessarily be confined to Extras.

She said the two Tesco trial stores were a first for Yo in the UK, and it had learnt a lot from an experiment that had been “well received” by Tesco customers.

The news came as Yo reported UK like for likes up 1%, driven by an increase in food to go and delivery.

The business increased UK turnover by 5% last year to £88.9m.

It said this reflected a resilient performance despite significant investment in developing new concepts and products, in light of the group’s new global strategy and industry cost inflation.

Yo To Go, not including Deliveroo, enjoyed a 22.9% like-for-like revenue increase.

Yo acquired Taiko Foods, supplier of pre-packaged sushi to brands such as Waitrose, during the period and added what it said was significant capacity for growth in UK supermarkets and other food outlets.

It joined forces with SnowFox, one of the US’s largest operators and owner of franchised sushi kiosks, earlier this month, to make it one of the largest Japanese food companies outside Japan, including 1,400 kiosks and 2,295 locations for packaged products.

“As a global multi-brand, multi-format Japanese food group, we have an opportunity to drive the availability and quality of sushi and fresh Japanese food,” said Yo CEO Richard Hodgson.

“In the UK in particular, we’ve spent the year identifying how to leverage our new combined knowledge to create new formats and products to broaden our appeal among UK consumers. We’re really excited about the coming year, as we continue to test new initiatives.”