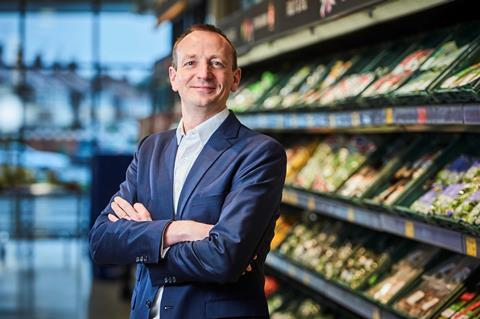 Aldi could open more than 50 of its new Local format stores in London, the discounter’s UK & Ireland CEO Giles Hurley has said.

Speaking today as the company announced its full-year results, Hurley said Aldi’s London estate could grow from the current 45 to 250, more than 50 of which could be Aldi Locals.

“We currently have eight Local stores in London and if I said to you that I reckon we’ll end up with around 250 [stores in London], I could see around 50-plus of those stores being Aldi Locals,” he said.

He also indicated the concept could go beyond London.

“Let’s see,” he said. “I think the focus on London is paramount, is clear at this point, and we have experience I’d like to think across the rest of the UK that we’ll be able to target towns and cities with our standard footprint. But never say never.”

The first Aldi Local opened in Balham in March and there are now eight of them in London.

The stores are around 6,000 sq ft, less than half the size of a typical Aldi. Bigger pack sizes have been sacrificed to make a slimmed-down range of about 1,500 products, better suited to the absence of a car park. Aldi’s usual centre aisle of general merchandise ‘Specialbuys’ is absent, while food to go and ready meals are prominently positioned in bays at the front of store. Three of the branches also have self-checkouts, a feature not found across most of Aldi’s UK estate.

Hurley’s comments went further on the planned expansion of the concept than an earlier Aldi trading statement, which said there would be 100 stores inside the M25 by the end of 2025, including Locals.

But operating profits fell 26% to £197.9m and pre-tax profits were down 18% to £182.2m, which Aldi put down to cutting prices and investing in infrastructure.

Hurley also echoed warnings from other retailers of a risk of shortages of fresh produce and the difficulty of stockpiling for the 31 October Brexit deadline.

“Naturally we’re carrying out some elements of stock holding within the business. It’s been well publicised that the last quarter is a difficult time for retailers to stockpile because Halloween and Christmas business is really upon the industry and taking up a lot of space. But we are seeking to find space and using our existing network to sweat it as much as we can. Stock holding on ambient products in particular is the focus.

“Items liked chopped tomatoes and olive oil, that aren’t produced in the UK and come from our European partners, would be focuses.

“There’s clearly a limit to what we can do because when it comes to short-life products you can’t really stock-hold them without damaging shelf life and clearly that’s not good for the customer.”

He added: “I’ve mentioned already that I can’t guarantee there won’t be shortages on some products but there’s no one in the industry who can guarantee that so I’m not alone.

“We need to understand what our future trading relationship will look like and then I think we can speak with more clarity on what the impact will be.

“Our focus is in shielding customers the best we can.”