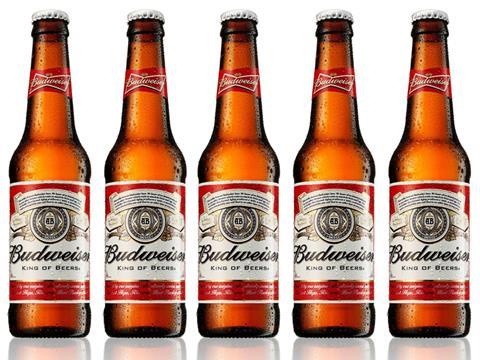 AB InBev has reported organic revenue growth of 6.3% in its 2015 financial year, despite a 0.6% decline in volumes.

The brewing giant said the growth in its revenue per hl of 7% was down to strong growth in its premium brands. However, volumes fell in every region apart from Mexico, with the steepest fall coming in Europe (-2.4%). Volumes in Western Europe, however, were up 3%, helping revenues in Europe grow 4.6%.

Volumes for the company’s own beer brands were flat, with the decline accounted for by non-beer volumes and third party brands. AB InBev’s three main global brands all grew: revenues for Budweiser were up 7.6%, Stella Artois 12.5%, and Corona 23%. Corona is in particularly strong growth in the UK, where off sales are up 39.7% to £77m [Nielsen 52 w/e 10 October 2015].

“In 2015, we not only took significant steps towards building a company that will stand the test of time, but also delivered a year of solid growth and progress against our commercial priorities,” said a spokesman.

AB InBev, the world’s largest brewer, reached an agreement to acquire its smaller rival SABMiller for £68bn last November, in one of the largest takeovers in corporate history. AB InBev said it expected the deal to complete in the second half of 2016.

Earlier this month, AB InBev agreed to sell SABMiller’s European business – consisting of the Grolsch, Peroni and Meantime brands – to Japanese brewer Asahi, for €2.6bn. It will make Asahi the first Asian brewer to gain a major stake in the European market.

And in December, AB InBev acquired London craft beer maker Camden Town Brewery for an undisclosed sum. It joins a series of US craft breweries owned by the company, including Goose island and Elysian.