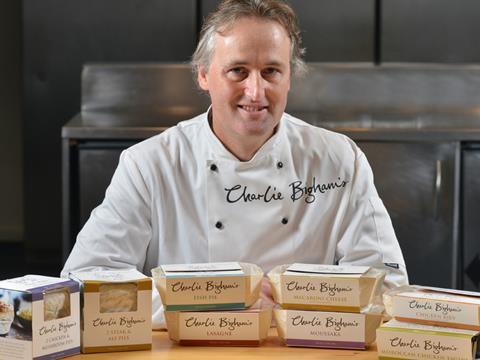 Sales at posh ready meal supplier Charlie Bigham’s have raced ahead another 28% to almost £50m as consumer appetite for premium products continued to grow.

Pre-tax profits surged 31% to £3.4m in the year to 31 August 2016 on the back of the more than £10m rise in revenues to £47.9m, accounts at Companies House show. It comes on top of a 28% jump in the top line in 2015.
The food manufacturer, best known for its upmarket fish pies, said in the accounts that investment in efficiencies in recent years had helped growth.

Charlie Bigham’s was named last month as one of the ‘1,000 Companies to Inspire Britain’ in a report compiled by the London Stock Exchange.

At the report’s launch, the company said sales in the half-year to end of February 2017 had grown 15% to £32m compared with the same period in 2015/16. Founder Charlie Bigham said the business was “continuing to demonstrate impressive growth”.

“We are excited for the year ahead, which will see our new facility opening in Somerset to further our development and bring delicious food to even more households in the UK.”

The group, which appointed former Wessanen UK boss Patrick Cairns as its new CEO in February, now employs almost 400 staff who prepare about 16,000 meals a day in the Charlie Bigham’s London kitchen.

“The business has continued to grow well with the fastest growing area of sales being the Charlie Bigham’s brand,” the business review in the latest accounts said.

“We believe we have further opportunities to grow with existing and new customers, across all ranges, and we will do our best to work with our customers to bring these to fruition.

“While the market remain fiercely competitive, we were able to maintain gross profit levels thanks to significant investment in capital in recent years and the efficiencies these investments have generated.”