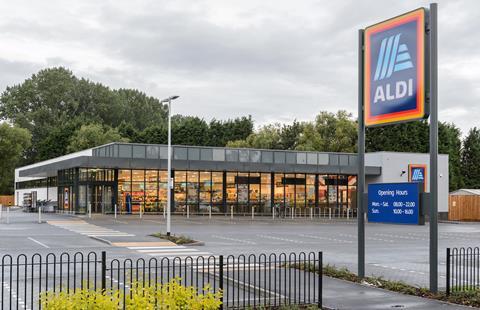 Aldi has announced plans to double its store footprint inside the M25 after posting an 18% drop in pre-tax profits despite a double digit sales increase.

For the financial year ending December 2018 UK and Ireland sales increased 11% to £11.3bn against industry-wide grocery market growth of 2.7%

Growth was driven by a 5% increase in customer numbers to 16.6m.

Operating profits fell 26% to £197.9m and pre-tax profits were down 18% to £182.2m, which Aldi put down to cutting prices and investing in infrastructure.

The supermarket group’s capital expenditure rose 19% in the year to £531.1m, while Aldi said its price investment had enabled it to maintain its price advantage of 24% over the Big Four on an average basket of everyday items.

The results come as Aldi said it would increase store numbers inside the M25 from 45 to 100 by the end of 2025, by opening more standard-sized Aldi stores and new, smaller-format ‘Local’ stores on London high streets.

Aldi UK and Ireland CEO Giles Hurley said: “Every day, thousands of British shoppers are swapping and saving with Aldi thanks to our carefully-selected range of great quality products and our commitment to the lowest prices in grocery.

“Whilst our expansion will continue to reach every part of the UK, we’re increasing our focus on London, where our market share is just 3.4%, compared to 8.1% nationally. London shoppers regularly tell us they would switch to Aldi if there was one nearby, so there is clearly a significant growth opportunity for us in the capital.”

Aldi said trials of its Local format – which measure around half the size of a typical store and stock around 1,500 products – had exceeded expectations since they began in March.

New Aldi stores opening inside the M25 over the coming months would include Sydenham, Blackheath and Watford.

The supermarket, which currently operates over 840 stores, plans to open more than 100 new stores across the UK over the next two years alone as part of its long-term target of 1,200 stores by the end of 2025.

Hurley added: “For almost three decades we’ve proven that investment equals growth – investment in our infrastructure, our people and our prices. The commitment we have made to our customers to continue investing in the UK over the coming years remains as strong as ever.

“Today, more than half of Britain’s households shop with Aldi. Now we’ll be bringing our winning combination of outstanding quality at the lowest prices to millions more households in the South East as well as the rest of the UK.”

It plans to invest a further £1bn planned over 2019 and 2020 in new stores, store upgrades and distribution centres.

Aldi said it was also continuing to roll out its Project Fresh initiative – a £300m investment to create more in store space for fresh, chilled and food-to-go ranges as well as simpler layouts, improved fixtures and brighter, wider aisles. Over half of existing stores have been converted to the new format with the remaining stores being converted by the end of 2022.

The company is also preparing to open its new Regional Distribution Centre in Sawley, Derbyshire, shortly and another in Bedford, Bedfordshire in the coming years, having recently opened its new site in Sheppey, Kent, with extensions to its sites in Darlington, County Durham, and Bathgate, West Lothian, now complete.

Aldi has also switched to 100% British on “dozens” of grocery lines following its pledge last year to increase its British supplier base.

The discounter said over 280 new products had been introduced this year, while over 40% of its range has also been reformulated to improve product quality.

Cake and speciality bakery company Finsbury Food Group (FIF) has posted its preliminary results for the year to 29 June 2019.

Group revenues were up 3.8% to £315.3m, representing growth of 4% on a like for like basis excluding the revenue from the closed bakeries and acquired businesses.

Second half like for like growth was 7.5%, which represented a significant step up from first half of 0.5%.

It said second half growth was driven by combination of organic growth, new business wins, price recovery and the acquisition of Ultrapharm

Profit before tax rose some 203% to £13.6m, although adjusting for non-recurring items adjusted adjusted operating profit fell 5.7% to £16.m with margins contracting to 5.3% from 5.9%.

Finsbury said this was due to the “challenging global environment”.

The group stated: “Performance is seen as resilient attributable to our capital investment, the diversification of the Group into foodservice and high growth areas such as free from, our constant drive for efficiency and our relentless drive to deliver on customer trends.”

Significant product launches during the year include a new vegan brioche style burger bun into foodservice, approved by The Vegan society and a new line of Mary Berry cakes

Also, investment in automated individually wrapped cake bar capacity led to the launch of a new range of cake bars for ‘on the go’ consumption

Finsbury also raised its investor dividend by 6.1% to 3.5p.

CEO John Duffy commented: “In what has been a continued challenging market environment, our sales growth and increased dividend demonstrates our ability to navigate more challenging times and our continued confidence in the prospects of the group. Our achievements have been underpinned by our relentless focus on investment, efficiency and innovation, alongside our ability to harness the growth available from premium, healthy and authentic on-trend innovation.

“We are confident that the group is on a strong footing and able to drive further growth in the period ahead, as we continue to build a strong, lean, scale competitor and consolidator.”

Finsbury Food Group shares have jumped 9.6% up to 71.8p on this morning’s news.

The full year earnings of spirits giant Diageo (DGE) is the company highlight of the week on Thursday as the City eases itself back into action following the summer break.

Tomorrow brings a third quarter sales update from Ocado (OCDO) following the completion of the sale of its UK retail arm into a joint venture with Marks & Spencer (MKS).

Wednesday brings an interim earnings release for sports nutrition specialist Science in Sport (SIS), while in the US General Mills will issue its first quarter earnings.

Finally, forecourt operator Applegreen (APGN) will issue its half year results on Friday.

Wednesday brings the publication of the UK’s monthly inflation figures from the Office of National Statistics. The Bank of England will publish its monthly decision on interest rates – widely expected to remain at 0.75% - on Thursday.

The official ONS Retail Sales figures for August will be published on Thursday.