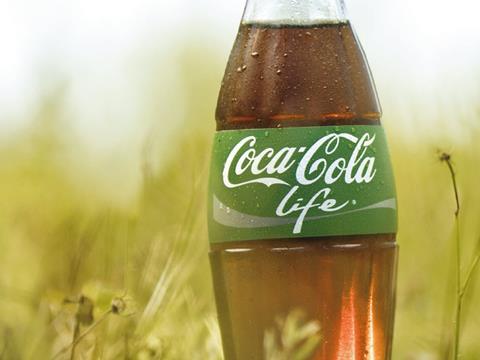 Coca-Cola Life racked up £26.5m at the tills in its first year on sale in the UK, according to bottler and distributor Coca-Cola Enterprises (CCE).

The stevia-sweetened variant was launched in September 2014 as a lower-sugar alternative to regular Coke, and contains two thirds of the sugar of its stablemate.

“We’re very pleased with the performance of Coca-Cola Life, which is now worth £26.5m in sales since launch,” said a CCE spokeswoman, citing Nielsen figures for the year to 26 September.

The supplier added it was “encouraging to see that Kantar data continues to show in the first year that over half of the volume switched into Life has come from regular carbonated soft drinks.”

CCE aims to make half of Coke’s UK sales lower or no calorie by 2020. The company says it is confident it will achieve this by continuing to invest in marketing Life and no-sugar variants Zero and Diet Coke.