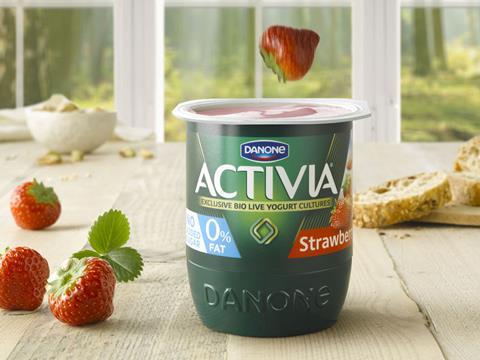 French dairy giant Danone (BN) has posted a 0.8% like for like sales growth in the first three months of the year as performance was hampered by tough comparatives, a consumer boycott in Morocco and weaker sales volumes.

Danone said its started of the year was “as anticipated” with consolidated sales up by 0.9% to €6.14bn on a reported basis and by 0.8% on a like for like basis.

The modest sales rise was driven driven by premium innovations and resilient pricing, given a 2.2% decline in volumes in the period.

Excluding Morocco, which was impacted by a boycott that started in April last year, sales were up 1.5% on a like-for-like basis with volumes down 1%.

Its ‘essential dairy & plant-based’ division reported sales up 0.2% on a like-for-like basis in the first quarter, including 3.8% decrease in volume and 4% rise in value. Danone said quarter “confirmed the good fundamentals of the business” but that growth was impacted by one less trading day for fresh activities in Europe and North America.

Waters delivered a solid broad-based sales growth of 3.9%, driven by volume (1%) and value (2.9%), with all regions contributing to this growth.

During the quarter Danone sold its Earthbound Farm business, which is said “reflects disciplined capital allocation and portfolio focus”.

Chairman and CEO Emmanuel Faber commented: “The first quarter showed a start of the year in line with expectations and further progress in our transformation journey.

“This performance has coincided with continued action to deliver sustainable profitable value growth, including the sale of Earthbound Farm, alongside the roll-out of value-added innovations across businesses and geographies to make our portfolio more local, more appealing to younger generations, and better suited to fast-changing consumer trends.

“We are pleased with the momentum of the business, which will become increasingly visible from the second quarter. This gives us every confidence that we will meet our full-year guidance.”

Danone is targeting like-for-like sales growth for the year of around 3% and recurring operating margin above 15%.

However, it warned it expects further cost inflation during the year, with a mid-to-high single digit inflation in the costs of raw and packaging materials.

This will include milk price inflation high-single digit overall, on the back of a rebalancing supply and demand dynamic, continued inflation in PET cost driven by sustained market demand and inflationary conditions in other raw materials, including sugar and fruits.

News emerged yesterday that Morrisons (MRW) is heading to the Supreme Court to fight judgement ordering it to pay damages to the victims of a data leak.

The supermarket lost an appeal against the High Court judgement over compensation for the breach in October, but the UK’s Supreme Court agreed to hear a new appeal yesterday.

A previous High Court judgement ruled that the firm was legally liable for a former employee leaking the personal information of around 100,000 staff, including salary and bank details.

The employee, Andrew Skelton, was jailed for eight years over the leak back in 2015.

Elsewhere, Britvic has updated the market on the process of replacing its CFO. It announced in October than existing chief financial officer Mathew Dunn was stepping down – today is has added his resignation will be effective from 19 April.

As previously announced, Joanne Wilson will join the company as CFO. She has no start date at this time but Britvic said this will “be announced in due course and will be no later than the end of September 2019”.

Card Factory jumped 10% back to 194.8p after issuing its annual results yesterday.