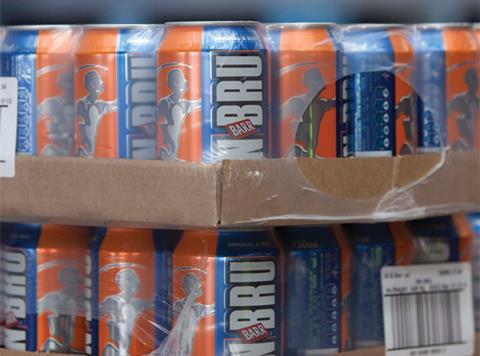 Shares at AG Barr (BAG) have slid 5.4% to a 35-month low after disappointing sales in the first half hit by mixed British weather and price deflation in the soft drink market.

Analysts trimmed their full-year forecasts for the Irn-Bru owner but expected growth to return in the long term. The share price is 5.4% down to an almost three-year low of 531.5p so far today – and has fallen 12% in value since Barr issued a pre-close trading update for the first half flagging up the subdued trading back in July.

Barr started the financial period by closing its Tredegar site in South Wales and transferring production to the new state of the art Milton Keynes factory. It also acquired cocktail mixer brand Funkin for £21m in February to broaden the product offer. Barr said the Funkin business was performing well against pre-acquisition expectations.

However, general trading in the period was hit by “continued price deflation and very poor weather, especially in the north of the UK”, the group said in the interim results. The figure was not helped by stronger comparatives from a year ago when the top line was boosted by the 2014 Commonwealth Games in Glasgow.

Adjusted profit on ordinary activities before tax, interest and exceptional items increased by 3.3% to £17.8m, but statutory pre-tax profits, which included deal costs of £670k related to Funkin, slipped by 11.3% to £16.9m.

CEO Roger White said: “Our focus in the coming months will be to build our sales momentum and continue our long-term brand investment strategy.

“Market conditions across the first half have been difficult and are forecast to remain so. The business is responding well to the market challenges but the weather since we last updated the market in July has been poor and, although we have recovered some sales momentum, it is not yet at the run rate we have targeted.”

He added: “As we look towards 2016 it is anticipated that the business will return to growth and begin to see the benefits of our improved operating platform.”

Investec, along with house broker Shore Capital, cut revenue and profits forecasts for the year but expected growth to return in the long term. The firm also revised its target share price from 737p to 670p but retained the ‘buy’ rating on the stock.

Analyst Nicola Mallard added: “We see no longer-term competitive issues here, however, and anticipate growth resuming in the second half and into FY17.”

Net debt at 25 July 2015 stood at £19.9m, having funded the Funkin acquisition, the Milton Keynes land purchase and the BPR project investment.