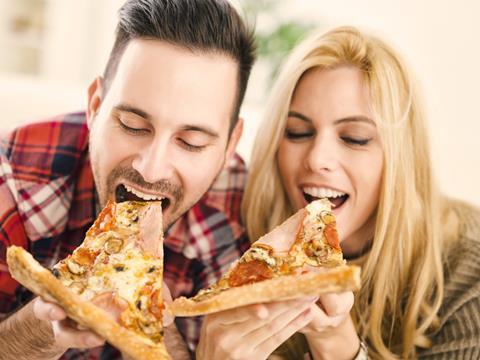 The UK’s appetite for takeaway food shows no sign of waning despite concerns over a squeeze on consumer spending as Just Eat (JE) reported another 46% jump in first quarter sales.

In the three months to 31 March reported revenues at the online takeaway delivery group were up 46% to £118.9m.

On a currency neutral, like for like basis, sales were up 40%, driven by strong order growth, last year’s commission increases and the inclusion of SkipTheDishes.

Total orders of 39 million were up 25% on a like for like basis, with UK orders of 24 million up 17%. After taking account of both the benefits associated with the additional leap year trading day and Easter falling into Q1 2016, order growth would have been 19%.

International orders of 15 million were up 38% or 43% on a like-for-like basis, thanks to continued progress rolling out its Orderpad restaurant platform, through the UK, Canada, Denmark, Ireland, Italy and Spain.

Paul Harrison, Interim CEO, and CFO commented: “Just Eat has enjoyed another period of strong growth. In addition to structural market growth, we are also seeing the benefits of ongoing investments in technology and marketing.

The results were achieved despite boardroom instability after chief executive David Buttress stepped down in February due to “urgent family matters” and chairman and interim CEO John Hughes last week temporarily stepped aside due to illness.

There’s little other news of note on the markets this morning, though the weekend papers suggested Marks & Spencer (MKS) is considering a shock tie-up with Ocado to kick-start a grocery home delivery service in the UK. See this morning’s Media Bites for more details.

Just Eat has dropped 1.7% to 567p despite the strong start to the year.

Most fmcg stocks have started the week positively. Sainsbury’s (SBRY) and Morrisons (MRW) are both up ahead of their market updates this week, with Sainsbury’s up 1% to 278.2p and Morrisons 1.7% to 244p so faqr this morning.

There is a busy week ahead despite the short week, with trading updates from both Sainsbury’s and Morrisons.

Sainsbury’s (SBRY) issues its full-year results tomorrow for 2016/17 with analysts expecting a modest fall in pre-tax profits amid weakening grocery performance propped up by solid trading at Argos.

Ocado (OCDO) will hold its AGM tomorrow along with Philip Morris (PM), but most attention will be on the AGM of Reckitt Benckiser (RB) on Thursday where two high profile investors have pledged to vote against the Reckitt board over the disinfectant scandal in South Korea.