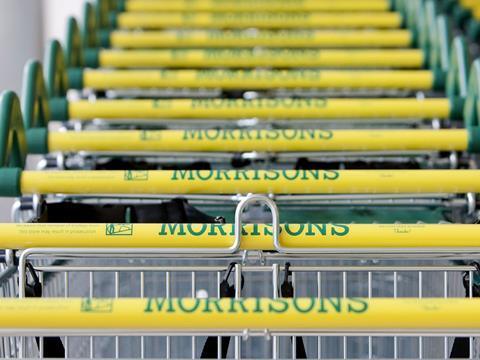 Clive Black and Darren Shirley at Shore Capital highlighted the impact of deflation and reduced vouchering activity on the results. “Taking the combined impact of 4.6% from deflation and lower voucher activity, we believe Morrison management is more confident that it is on-track for the first stage of its turn-around, the stabilisation of superstore volumes, than the -2.6% like-for-like decline would initially imply.” The new Morrisons senior team had a big task on its hands in simplifying operations, but there were some positive signs, they added. “We see generally stronger store disciplines, cleaner stores, improved availability and more impactful promotions year-on-year. ‘Made by Morrisons’ is also filtering its way into the fresh food offer through improved product formulations e.g. quiche, whilst Market Street in its entirety remains a proposition that Morrison seeks to bring quality, differentiation and value.”

Jefferies also pointed to deflation and vouchering as key factors affecting Morrisons’ performance, but said “a stronger Morrisons” was emerging. “An accelerating impact from winding down of vouchers and further background price deflation continue to weigh on sales, but are necessary steps to strengthen Morrisons’ customer appeal. The group’s cashflow profile justifies more patience.”

Bernstein was more reserved in its assessment. “Falling like for likes and total sales worse than consensus will disappoint the market and is in line with our view that an undifferentiated retail offer will underperform the UK market,” the team around Bruno Monteyne said. “Morrisons has not yet found a trading and retail proposition that will differentiate it in the market place. However, it has a strong balance sheet which gives it more time than others to find a new identity. We are negatively inclined towards this stock but on a one year basis believe there will be enough positive catalysts for it to perform in line with the market.”

Mike Dennis at Cantor said Morrisons had made significant improvements to its price positioning and management now had to make marketing and communication a priority. “We believe CEO David Potts has the right strategy and should continue to focus on rebuilding the core supermarket sales volumes by building transactions (improving customer conversion and frequency), retaining loyal shoppers and resetting store contribution margins to a sustainable level,” he said. “Investors probably need more ‘vision’ and understanding around how the new Morrisons offer will look and whether or not the vertical integration can be ‘weaponised’. To this end, management has completed the majority of the price investment phase so they now need to focus on the communication side of their value messages to broaden their customer base and increase their UK reach via on-line, relaunched formats and new improved ranges (freshly made sandwiches).”

“It’s hard to see Morrisons ever making a full recovery, and it’s potentially ripe for takeover. Only question is, who will buy it?”

In contrast, John Ibbotson of Retail Vision warned Morrisons was entering the Christmas period “in near critical condition”. “To claim you are making good progress on the back of these numbers is bordering on the delusional. David Potts has been in charge for nine months now but his turnaround plan isn’t working. He can’t blame it all on food deflation, either, because that’s happening to all the supermarkets. It’s hard to see Morrisons ever making a full recovery, and it’s potentially ripe for takeover. Only question is, who will buy it?”

Retail analyst and consultant Nick Bubb called Morrisons’ performance a “damp squib”. ”Morrisons blame 2.2% food price deflation and reduced vouchering (claimed to have knocked sales by 2.4%), but the plan to “stabilise trading” still seems a bit remote, even though the new CEO Dave Potts says, rather lamely, “we are improving the shopping trip and serving our customers better”. The comment that “As previously guided, we expect that underlying profit before tax will be higher in the second half of 2015/16 than the first” is also rather unhelpful, so we hope management don’t just plan to burn an effigy of ex-CEO Dalton Philips on the 9am conference call.”

David Stoddart, analyst at Edison Investment Research, said: “It is all very well Morrison reporting that customer satisfaction scores were materially ahead of last year but this was not enough to prevent both the number of transactions and the number of items per basket from falling again. This was despite ex-fuel price deflation of 2.2%. Overall, ex-fuel LFL sales fell 2.6% in Q3, with reduced voucher use explaining 2.4%. Adding in the impact of lower fuel prices, total LFL sales, including fuel, were 5.1% lower than a year ago. The news is not all bad. Morrisons is on target to lower net debt faster than previously expected and it continues to believe that H2 profit will be higher than H1’s. However, there is not much here to support the almost 4% jump in the share price yesterday.”

However, Bryan Roberts of Kantar Retail struck a more positive note. He said Potts had made some important decisions since taking charge of Morrisons, including ending its convenience “misadventure”. “With a leaner range and sharper promotional structure, Morrisons is stabilising its core business, although a lot will rest on how these improvements are communicated to shoppers. The business has a strong narrative to share on fresh, quality, value, service and provenance – now is the time to trumpet this differentiation. Early signs regarding the chain’s Christmas advertising are encouraging in this regard.”