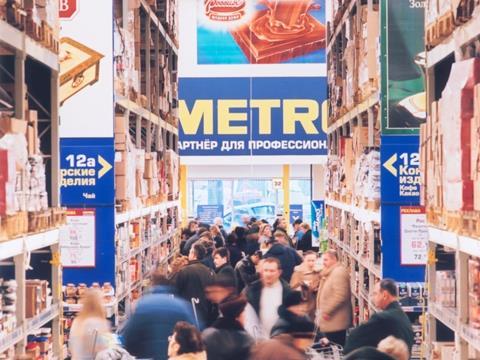 German retail giant Metro experienced a 2.2% fall in reported group sales as the sharp drop in the value of the Russian rouble hit its first quarter trading.

Reported sales fell to £18.3bn in the quarter from €18.7bn in the corresponding period last year.

This was primarily driven by a 12.4% revenue plunge in its Eastern European operations, which last year accounted for around a quarter of total sales.

Adjusted for the effects of currency and negative portfolio effects (including its sale of Real Eastern Europe and Makro Cash & Carry Egypt), the group achieved sales growth of 2.6% for quarter.

“Overall, we remain confident that we will achieve our sales and earnings targets for the full year.”

Sales in Germany were 0.1% up, while Western Europe saw 1.1% sales growth, driven by the strong performance of Media-Saturn, particularly in Spain.

Net profit for the period was down 10% to €404m, due to a higher tax rate and exchange rate losses of approximately €60m.

Metro said it expects to see a slight rise in overall sales, “despite the persistently challenging economic environment”.

Analysts at Bernstein commented: “We believe that Metro has strong assets and the consensus view is clouded by its German operations and tax problems.”

The broker remains “positive” on the retailer based on three factors: firstly that cash and carry is a superior retail format in early stage emerging markets; Media-Saturn has successfully repositioned itself for an online transition; and Metro’s tax problems in Germany are clouding the view on underlying earnings.