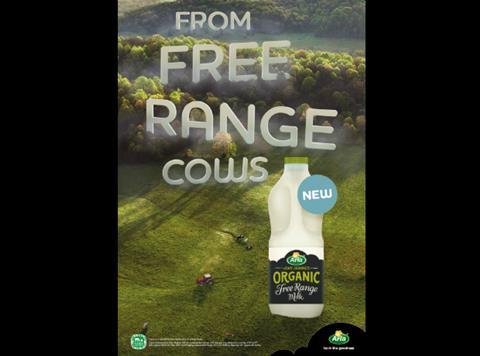 Dairy giant Arla Foods has continued last year’s positive sales growth during the first six months of 2017, with its branded portfolio in the UK enjoying a 15% rise in revenues.

Year-on-year group revenues for the global Arla Foods grew 3.4% to €5bn (£4.6bn), according to the dairy co-op’s half-year results, published today, driven by improved demand for milk and dairy products in Europe, the US, and emerging markets.

Arla’s international business outside Europe saw revenues grow 10% to €792m (£729m), primarily driven by a strong performance in sub-Saharan Africa (up 32%) and China and south east Asia (up 36%).

Arla’s largest market, the UK, saw a 10% increase in net revenue from its Lurpak and Castello brands, with products sold under the Arla masterbrand seeing particularly strong revenue growth of 15%. This had been driven by a very strong performance in yoghurts, the dairy co-op said, with Arla Protein and Arla Skyr seeing revenue rises of 59% and 82% respectively.

The improved performance of its UK business reflected an “exciting year so far” Arla said.

It followed the announcement of a plan to invest £37.5m in UK sites during the year, the rebranding of its organic milk brand as Arla Organic Free Range Milk and success in its own-label business, which saw Arla UK agree a new three-year exclusive contract with Morrisons in May.

It comes as Arla UK announced a rise in its monthly farmgate milk price paid for September, which equated to an upward movement of 0.81p, taking its UK standard litre price for conventional milk to 30.79p.

This means the dairy co-op has contributed to a total price increase of 42% over the past 12 months.

“They needed that,” said Arla Foods CEO Peter Tuborgh. “The past two-and-a-half years have been tough for most dairy farmers around the world. Yet despite that tough backdrop, we have continued to invest, innovate and grow and that growth is making an important contribution not just to our farmer owners, but to the overall resilience of the industry,” he added.

Arla UK MD Tomas Pietrangeli added: “Our mission remains to secure the highest possible value for our members’ milk, predominantly through the development of our branded portfolio. The strong growth of the Arla, Lurpak and Castello brands shows that we were right to focus on these as part of our UK Strategy 2020.

“This success is likely to be welcomed given the wider turbulence of the last six months. We are entering a defining time for British dairy as the UK finds its place outside the EU. Arla will continue to work in the coming months and years on generating greater returns for our farmer owners and being a champion of British dairy at a time when it needs one the most.”