Tesco results: what the analysts say 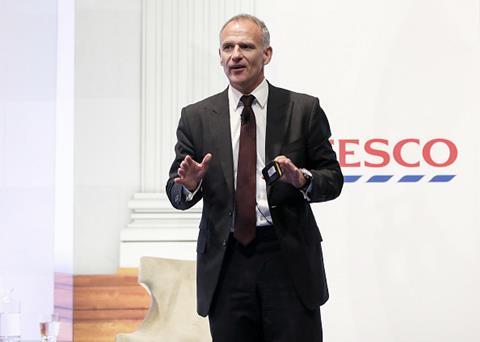 Inflation … clearly goes through the system. If any bears still think that inflation isn’t being passed on, this and Morrisons’ update should make them rethink.

Philip Benton, Senior Analyst, Euromonitor International, said: “Tesco posting their first full-year increase in UK like-for-like sales in seven years is as much to do with a rise in UK inflation as it is Tesco’s restructuring plan. BRC released data this week which illustrated that food spending had increased by 1.2 per cent in the first quarter of 2017 (versus the same period of 2016) whilst non-food retail sales were in decline. The cooling of the UK supermarket price wars has enabled Tesco to increase their value sales, as well as volume sales, but this will likely be a result of inflation costs having been passed onto the consumer. The ONS has said that food prices rose year-on-year in February 2017 which is the first price rise seen in three years. The accounting scandal of 2014 continues to have a negative impact on profits and the on-going battle to acquire wholesaler Booker is the main concern for Tesco’s shareholders. However, there is much to be optimistic about and a restructure in the international leadership team, with new chief executives for its Asian and Central European businesses, imply that Tesco has one eye on ramping up its overseas sales to hedge the risk of Brexit on its core UK operations.”

“The group is making progress on its restructuring, with the full-year LFL sales returning to growth. However, competition remains as strong as ever from the discounters and although Tesco has brought its average basket down 6% in price from September 2014, the pricing differential remains. The stock is currently trading on 20x consensus 2017/18 earnings, with this falling to 13x in 2019/20. We believe that this looks expensive and that the underlying assumptions about sales growth and margin improvement seem optimistic. As a results, we remain sellers of the stock.”

David Beadle, Vice President – Senior Credit Officer said: “With further progress in like-for-like sales and an ongoing recovery in underlying operating profitability in the UK, Tesco’s preliminary results are in line with our expectations. The operational momentum and a further reduction in reported net debt support the stable outlook on the company’s Ba1 rating. However, as the company’s credit metrics are still weak, for now Tesco remains weakly positioned in the rating category.”

Phil Dorrell said: ”It’s a far cry from the £4bn Tesco earned 5 years ago but it is still a very healthy improvement on last years profit. The multi-pronged strategy adopted by Dave Lewis is working on all counts and just needs the Booker deal signed for a full house. Although not enough on their own to avoid a head on price war, the sub-brand entry level ranges are delivering great value for money and adding to market share. Cost cutting will continue to feature in Tesco’s outlook: cutting 24 hour opening, switching to twilight filling. However we are spotting cracks in store standards and availability as a result. Lewis must be careful not to cut too deep too quickly.

”In our opinion adding Booker to the Tesco stable is a good long term strategy. Far from being a distraction to the UK core business, it would be beneficial. If anything, pulling the plug on the Booker deal could be more distracting.

”Tesco is a retailer with its finger on the pulse. A clear sense of direction and a team that is fuelling the engine will be giving the competition cause for concern.

John Ibbotson said: “Tesco’s fairy-tale recovery story continues. And at a time of cut-throat competition, it is all the more impressive.In his relatively short tenure, Dave Lewis has turned a thoroughly demoralised business into one with a clear sense of direction. The core UK market is starting to fire on all cylinders, debt is down significantly and the group performance has been marred only by weakness abroad, especially in Thailand. But there’s a long way to go yet, especially with inflation likely to rise further and competition in the core UK market extreme. Remember that the old Tesco made profits of £3.8 billion in 2011, a peak it may never again scale. Tesco is on the right track but sustainable improved profitability is not guaranteed. The Booker deal, if it goes ahead, could prove decisive. It will help Tesco to keep costs and prices down for longer than its rivals, increase its margins, gain more exposure to the growing ‘out-of-home’ food market and grow all-important market share The Booker deal is all about short-term pain for long-term gain.

“Dave Lewis has achieved this turnaround by returning the company to the basics of retail: pricing to match the UK discounters, new and simplified product ranges, better customer service and regained customer trust in Tesco.

“He has also improved the relationship with suppliers and that’s no small achievement. Strengthening the balance sheet by selling off non-core operations, closing underperforming stores and writing down the property portfolio have all started to make an impact on profitability.”

“Tesco remains on quite a long recovery journey given how far the business fell from grace earlier in this decade. Whilst this is so, therefore, we take genuine encouragement from the ongoing progress that has been delivered by CEO, Dave Lewis and his team; we continue to remind Tesco investors that Mr. Lewis delivered wonders in keeping a chaotic situation upright when he joined the business, which he then stabilised so now allowing growth-on-growth to be reported in FY2017.

”If we look to our FY2018 financial forecasts for Tesco, further recovery is anticipated; we currently expect c15% growth EPS to 9.3p; we shall finesse our expectations following the Easter break. We should add that we see little scope for material distortion to our FY2018 expectations for Tesco from the proposed Booker merger due to the aforementioned time that it is likely to take for full regulatory clearance, assuming that it comes through. Indeed, once cleared it is likely to also take some time for the proposed merger to yield the anticipated synergies. As such, based upon the balance of the new equity issued, which should enhance the Tesco’s gearing ratios albeit not its lease commitments, and the ongoing anticipated synergies, we have to say that we are reasonably underwhelmed by the magnitude of the benefits that are expected to come through for ongoing Tesco shareholders; we estimate no EPS enhancement in FY2019.

Note: With more capital on the balance sheet through the proposed equity issue, the pressure to deliver cash flow from the merger is beyond anything Mr Wilson has worked on in recent times. Accordingly, Tesco’s FY2017 results reveal a business in much better shape compared to the recent past and also on an improving trend. Excluding Booker we were warming to the medium-to-long term investment story for the supermarket business alone but felt that much near-term upside was already ‘in the price’ so to speak. That view seems to have been mirrored by the market over the last year or so and for us does not change today even with a nice beat to our FY2017 expectations.

The proposed Booker merger does not move our dial on Tesco either; we do not see it as being transformational to supermarket group’s prospect. What the process does do, however, is freeze or fossilise the Tesco investment story for a while until it becomes clear as to what the CMA decides to do. Once we have more colour on clearance, any remedies or otherwise, we shall reflect upon how medium-term investment thesis for Tesco looks. We continue to suggest that investors will also benefit from patience.”

- “Firstly, they have sorted out the problems in their retail operation by investing in staff and service: 15,000 added over Christmas and staff ‘helpfulness’ at record levels. The product range is also 24% simpler and 6% cheaper and product availability is at an all time high too.

- “This has made in store shopping much easier for customers, who can rely on split-second decisions of the heart instead of slow rational thinking. 90-95% of daily decisions are made by quick fire emotional thinking, as opposed to logical thought (Kahneman 2011, Sharp 2010).

Tesco’s 7 new fresh food ranges now account for 64% of customer baskets, it has added 4,400 new products across the whole store and has taken food quality perception to record highs.

This year Tesco launched its ‘Food Love Stories’ campaign which captures the emotional connection food brings between the people and food, reestablishing the brand as one of the heart instead of the mind. The emotional approach has paid dividends in favourability, scoring record highs in a YouGov brand attributes poll in Feb 2017.

“The emotional connection is driving brand preference and building share, leading Tesco to its first full year of positive like-for-like growth since 2009/10, even though promotions are down 24% this year. Margins are up because customers are relying emotional preferences without the need for promotional ‘bribes’.

“These are really good results - they show really strong progress in the core fundamentals which will drive the business in the medium term - I predict Tesco is set up for another year of profitable growth.”

Andy Brent, author of The Growth Director’s Secret, former CMO and board member of Boots, Barclays and Sky