Waitrose profits sliced in half as restructure plan takes toll 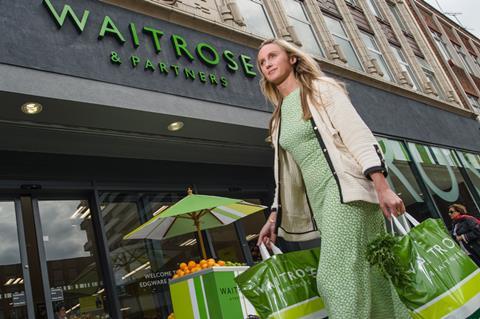 Profits at Waitrose have almost halved as its controversial Future Partnership restructuring plan and finance expenses took their toll on the business.

Exceptional costs of more than £30m related to redundancies at head office and store closures - as well as a net finance expense of £70.3m - eroded a healthy growth in operating profits at the supermarket, according to newly filed accounts for the year ended 25 January 2020 at Companies House.

Operating profits before exceptional charges and staff bonus jumped 50.8% to £162.1m in the period thanks to improvement in gross margins, as the business lowered branch operating costs and administrative expenses. A strong operational performance was offset by cost inflation and investment in non-management pay, Patrick Lewis, JLP finance director, wrote in the accounts.

Waitrose sold five stores to other retailers during the year and closed seven branches. New chairman Sharon White announced in March three more stores would be shuttered later this year as part of an ongoing strategic review, as she rethinks parts of Mayfield’s controversial plan.

However, the Waitrose Companies House accounts revealed the closure of Four Oaks and Waterlooville stores has now been delayed until 6 September as a result of the Covid-19 pandemic. The store in Helensburgh closed on 3 May and could not be delayed because of an agreement to sell the site to Morrisons.

Gross sales at the supermarket declined 1.1% to £6.6bn in the year, with like-for-like sales excluding fuel down 0.2%. However, the performance improved over the course of the year, with a 0.3% fall in the first half moving to a 0.1% rise in the final six months of the financial period.

“The scale of the changes to date and the programme of activity that will follow will take a number of years to deliver, with costs expected to recur across a number of financial years,” Lewis added in the accounts.

He expected further costs at head office in the next two years as the partnership finalised the review and remaining functions. However, timescales will need to be reassessed due to the coronavirus outbreak.

The John Lewis side of the group, which struggled with declining sales and profits in 2019/20, closed all 50 of its department stores because of the coronavirus lockdown.

The group announced this morning it would reopen two of the 50 stores on 15 June, followed by 11 more on 18 June, following further government relaxing of lockdown for non-essential retailers. The business said it had learned from the social distancing safety measures put in place at Waitrose.