Walmart wakes up to Asda 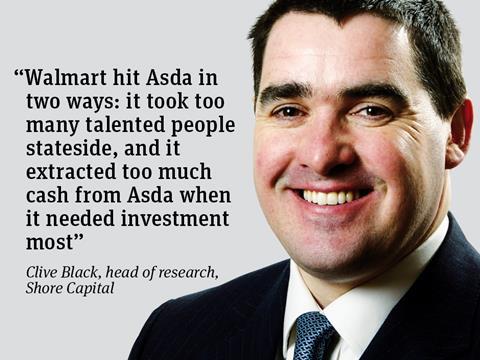 Asda has been struggling in the UK for a couple of years, enduring heavy falls in like-for-like sales and corresponding market share. Such a performance is particularly worrying for what is supposed to be a value-based superstore group, given the market has been distinctly price conscious – that is, it should be Asda’s type of market.

That Asda has been delivering this trading is all the more surprising given its effective CEO & president, Andy Clarke, was the first of the big four supermarket bosses to identify some of the more structural challenges facing this format cohort: a complex proposition, a lack of focus on price versus the discounters and so a fundamental disconnection with shoppers.

Accordingly, Clarke simplified Asda’s offer, cut back on vouchers and price-matching claims, sought to ease off on promotions – although the reality didn’t always match the rhetoric – and, yes, some price cutting. Whilst that was all well and good, and in fact delivered early promise, a number of processes were commencing that led to the aforementioned deterioration in trade.

First and foremost, Walmart hit Asda in two ways. It took too many talented people stateside, and it extracted too much cash from Asda when it needed investment most. Second, Asda fundamentally misjudged why the discounters were hitting it in particular - that is, Aldi and Lidl were not just about price! More often than not, shoppers noticed superior products per pound and were enticed by better marketing. Third, Asda has not been alive enough to the self-improvement by key superstore competitors, Tesco and Morrisons. The rest is history

With the Q1 FY2017 like-for-like sales down by more than 5%, Walmart has finally awoken to the potential for an implosion of Asda’s earning through negative operational gearing. Asda has endured seven consecutive quarters of heavy like-for-like falls. Dave Cheesewright, the British head Walmart International, outlined Asda would now seek to protect share over margin – much, we would suggest, to Andy Clarke’s relief.

We shall watch with interest to see what Asda does to re-connect with shoppers and, in particular, how the pricing regime evolves. However, if Asda’s competitive challenges were just about price then it would be a far easier job to undertake than reality suggests. Rather, we believe Asda needs wholesale change, starting with more support for Mr. Clarke – we note Roger Burnley is highlighted as an heir apparent – better quality product and possibly a revisited supply chain, superior marketing and more motivated staff; and, yes of course, against the LADs in particular, stronger pricing.

For the market, the potential re-awakening of Asda, if it is executed properly, is probably most concerning to the LADs at the sharp end of the value spectrum. Morrisons and Tesco will be keenly observant too, albeit their own self-improvement programmes are well underway. In that respect, we sense rejuvenating Asda will be time consuming and not without risk. A sharper gross margin environment will not be what Mike Coupe wants to see either, just as his Sainsbury business is about to launch into Argos – scrapping Brand Match may prove to have been wise, though.

Lastly, whilst relieved for Asda’s folks, the way Walmart over-extracted from what was once a British jewel in the crown surprises us, not reflecting well on a value-based group that one would have thought would have known better. At least Mr Clarke no longer has to justify a superior, but ultimately unsustainable, profit performance.

Clive Black is head of research at Shore Capital