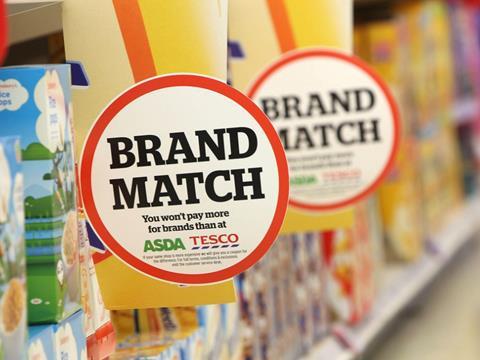 Brand Match has been key to Sainsbury’s recent growth

Sainsbury’s is set to make its first major change to Brand Match since launching the price-matching scheme in 2011.

Shoppers currently have to spend a minimum of £20 and buy at least one branded item to receive a Brand Match coupon at the till if the branded products in their basket are cheaper at either Asda or Tesco.

However, from Monday, shoppers will instead need to buy 10 different items, including at least one branded product. At the same time, Sainsbury’s will also make some changes to what is and is not included in the scheme.

The retailer, which has been communicating the change via email and coupons at tills, said it would make Brand Match “easier”.

“Our customers love Brand Match as they know it reassures them that they will enjoy great value on their branded grocery shopping,” a spokesman said.

“We hope this change will make it even easier for customers to understand how the scheme works and how they can benefit from it.”

There has been a mixed reaction on social media. Writing on MoneySavingExpert.com, one user posted: “Makes little difference. Instead of making sure my shop is over £20, I just have to make sure I have nine other items in the shop.”

Brand Match has been key to Sainsbury’s 36 consecutive quarters of like-for-like growth, which came to an end earlier this year with its Q4 results.

The change also comes as the price war hots up among the big four. Although outgoing CEO Justin King downplayed the price war earlier this month because “price skirmishes” were an ever-present feature of the market, Sainsbury’s launched its biggest-ever own-label campaign two weeks ago.