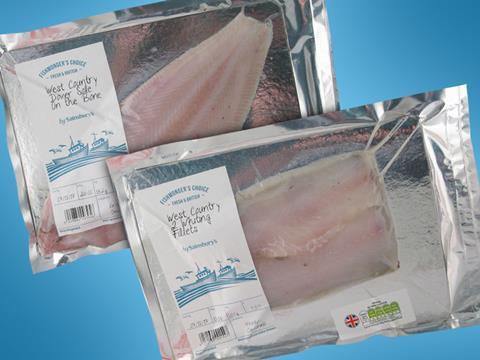 Sainsbury’s has launched a new own label seafood range as part of plans to encourage customers to try a wider variety of fish.

The Fishmonger’s Choice range went on sale in the chilled aisles of 210 Sainsbury’s stores on 1 November, featuring little-used species of fresh British fish that are landed off the south coast of England.

Sold at catch weight, Dover sole on the bone and monkfish fillets would be available year round, Sainsbury’s said, while whiting, pollack, hake and ling would be added when in season.

Sainsbury’s research found shoppers were reticent when considering new species, often due to not knowing how to cook the fish, a spokeswoman said.

To combat this “fear factor”, the Fishmonger’s Choice range featured cooking tips on pack, such as ‘cook me like cod’ on whiting fillets, or ‘cook me like prawns’ on monkfish.

“Fish consumption in the UK is still concentrated on the big five: cod, haddock, salmon, prawns and tuna, which make up around 70% of our volume sales,” said Sainsbury’s aquaculture and fisheries manager Ally Dingwall, who added the retailer was seeking to encourage shoppers to broaden their horizons.

“We’ve launched this new range to help shift perceptions of lesser known species. It’s about making fresh, seasonal, British fish readily available to customers and offering more approachable formats of species like whiting and monkfish, so they can purchase and prepare it with confidence.”