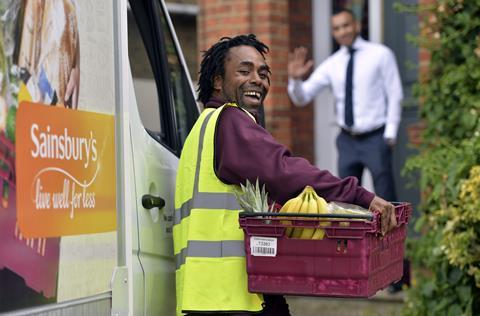 Sainsbury’s will have more than doubled its pre-pandemic online grocery order capacity by the end of October, the supermarket announced today.

Some 700,000 online orders per week will be fulfilled via both home delivery and click & collect by the end of next month, compared to the 340,000 per week count in March.

Sainsbury’s is adding an hour to its home delivery offer to achieve the milestone; starting morning deliveries half an hour earlier from 6.30am with late night deliveries dropped off up until 11.30pm, half an hour later than previously available. The new delivery times will be available from most stores and put in place over coming weeks.

The supermarket has reinstated its Delivery Pass subscription service to new customers. The pass allows customers to pre-pay delivery fees in three, six or 12-month blocks. The pass – which is available for anytime or mid-week deliveries – allows users to schedule a delivery a day, with a minimum order value of £40. New subscriptions are tracking at 120% versus last year.

“Doubling our grocery online orders in six months to 700,000 is an incredible milestone. It has been a huge team effort and also demonstrates the strength and flexibility of our online model,” said Nigel Blunt, director of ecommerce at Sainsbury’s.

“Over the past six months, customers have adapted to shopping increasingly online and we’re hearing really positive feedback from shoppers using this service. With our strong availability, outstanding stores and amazing colleagues, we’re ready to serve our customers however and whenever they want to shop,” he added.

Sainsbury’s smartphone-based self-scanning option SmartShop Mobile Pay is being “rapidly rolled out” into the supermarket’s smaller format convenience stores and is set to be live in more than 250 Sainsbury’s Local locations by the end of the week.