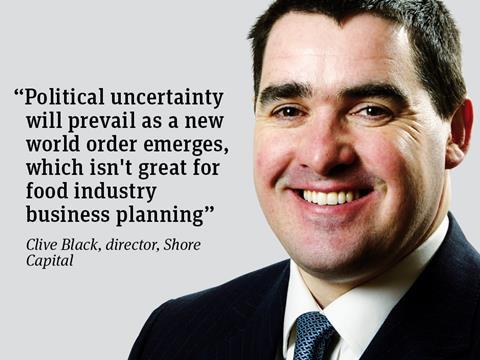 Coventry City, Derby County and Nottingham Forest supporters will be gutted that it looks like Leicester City will not repeat last year’s remarkable footballing achievement. Leicester City was, however, a metaphor for a volatile 2016. It was a year when politics drove a potentially changing economic and business climate, bringing what may be an era of uncertainty - but perhaps opportunity, too, for the food and retail industries.

With Renzi gone, May in and Trump’s arrival, what of 2017? What could possibly prolong political uncertainty? We will not have to wait long to see Trump’s arrival at the White House (or will NYC be the new home of American policy making)?

Within 10 weeks of Trumptonia commencing, Mrs May is expected to trigger Article 50. The combined outcomes of Trumponomics and the evolving UK-EU political relationship are going to condition a lot of economic activity for British firms for the foreseeable future, not least around free trade. Will the US apply tariffs to Chinese goods (as promised)? If so, how will China respond and what of UK goods and services to the EU and vice versa after 2019?

The good news of sorts is that these processes are known unknowns, to draw upon Donald Rumsfeld’s expertise.

However, in 2017 there are also a lot of political ‘unknown unknowns’ that could considerably condition the business environment from the current ‘known knowns’ situation. Indeed, major political events in China in the autumn and an Iranian presidential election could be very ‘big stuff’ for Mr Trump to tweet about.

Closer to home, elections in France, Germany and the Netherlands could also adjust Mrs May’s negotiating partners considerably by the year end. Pollsters predict that the (far) right will not be in any of the hot seats… Hmmm.

What this all means is that political uncertainty will most likely prevail as a new world order emerges, which isn’t great for food industry business planning. Whilst so, volatility can bring opportunity and hopefully the British food industry can continue to be agile and effective in a rapidly changing world.